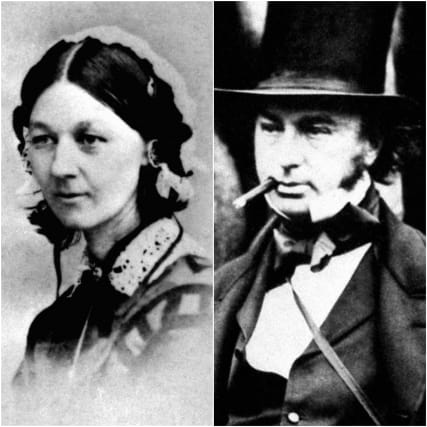 As the NHS Nightingale hospitals begin taking their first Covid-19 patients, the inspiration for pop-up medical facilities dates to the Crimean War.

The new hospitals are named after Florence Nightingale, who pioneered modern nursing during the 19th century.

Appalled by the conditions faced by injured British soldiers in the Crimea, Nightingale, who was working at the Selimiye Barracks in Scutari, pleaded with the Government to take action.

In 1855 Victorian engineer Isambard Kingdom Brunel was commissioned to design the first ever prefabricated hospital.

The Renkioi Hospital was designed by Brunel in just six days before being manufactured and shipped from the UK as a prefabricated flatpack.

Brunel’s design included innovative ventilation, drainage and temperature control mechanisms, and could be constructed as a series of units, each housing 100 patients.

Nightingale and her team of volunteer nurses worked at hospitals across Turkey and she referred to Renkioi as “those magnificent huts”.

Tim Bryan, director of the Brunel Institute at the Bristol-based SS Great Britain, said: “With the war not going well, and a national scandal following reports in the Times newspaper that more British troops were dying of cholera, dysentery and typhus in hospitals than on the battlefield, the War Office were prompted to take urgent action.

“Brunel was asked to design a prefabricated hospital that could be dispatched to the Crimea as soon as possible.

“Rising to the challenge, Brunel completed his initial designs in six days. Following the building of a mock-up of a ward near Paddington, construction began almost immediately.

“Although the idea of ‘sanitary’ hospitals had been promoted by Florence Nightingale it is not known if Brunel consulted her, but his designs incorporate much of the modern medical thinking around good sanitation and ventilation.”

The project was completed within five months and the prefabricated sections, stores and other materials were transported in 23 ships, with the first arriving in May 1855.

Brunel’s hospital was built at Renkioi in the Dardenelles and within a few weeks was caring for 300 wounded, a figure that had risen to over 1,000 by the end of the year.

“The war ended in January 1856 and the hospital was taken out of use by late spring, having looked after 1,331 patients, of whom only 50 died,” Mr Bryan said.

At the hospital at Scutari, where more than 40,000 soldiers received treatment in a two-year period, over 5,000 died.

“The numbers of patients handled at Renkioi was modest but the project does demonstrate the ingenuity and eye for detail that Isambard Kingdom Brunel showed throughout his career,” Mr Bryan said.

“To design, construct, transport, rebuild and commission an entirely new kind of hospital 1,000 miles away in only five months is no mean achievement and comparable to great work being done by engineers and NHS staff today.”

The first Nightingale hospital, at the ExCel London, admitted its first patients on Tuesday, while the second facility will open in Birmingham on Friday.

Further hospitals will open in Bristol, Manchester and Harrogate.

Another facility will open in Cardiff at the Principality Stadium, as will centres in Scotland and Northern Ireland.