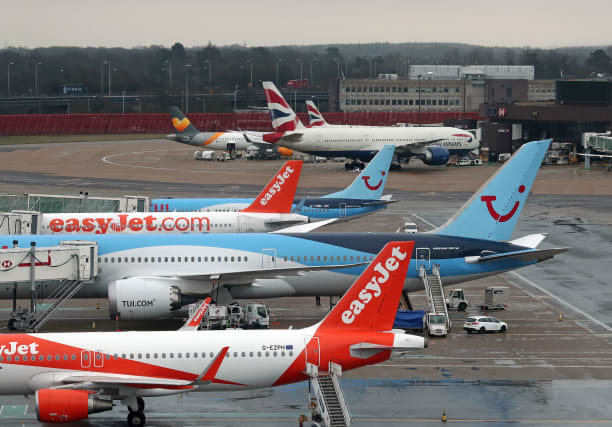 Airlines will be able to defer payment of charges for air navigation services in European airspace.

The UK was among the member states of Eurocontrol – the European air traffic co-ordinating agency – to support giving carriers the option to withhold payments for 14 months from February.

UK airlines could save tens of millions of pounds a month as a result of the decision, the Department for Transport (DfT) said.

Carriers are normally billed by Eurocontrol two months in arrears for flights in European airspace.

The DfT calculated that the 10 largest UK airlines would have been expected to pay a total of £47 million for their operations in February.

Airlines have grounded the majority of their aircraft due to the collapse in demand caused by the coronavirus pandemic.

Transport Secretary Grant Shapps said: “This is a very difficult time for airlines but they continue to provide a vital service bringing UK citizens home and transporting vital medical supplies.

“Deferring these charges will further help airlines, on top of the unprecedented package of economic measures recently announced by the Chancellor, to support businesses through this challenging period.”

Eurocontrol director-general Eamonn Brennan said: “I am really delighted that our member states have approved this essential measure.

“It will provide much needed liquidity support.

“Many airlines contacted Eurocontrol to confirm that they would not be in a position to facilitate their next payments.”

Chancellor Rishi Sunak has told the aviation industry he will not create a specific support package for it, but the Government is prepared to enter into negotiations with individual firms once they had “exhausted other
options” such as raising cash from existing investors.

Virgin Atlantic had previously urged the Government to offer carriers emergency credit facilities worth up to £7.5 billion.

On Monday, easyJet announced it has secured a £600 million Government loan and will borrow a further 500 million US dollars (£406 million) from commercial creditors as part of its “focus on maximising liquidity”.