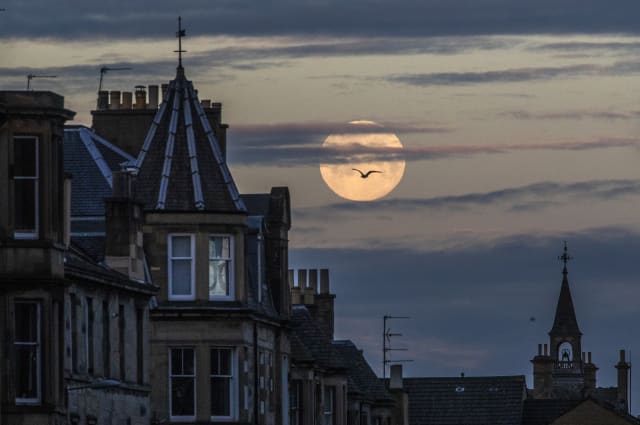 Residents in a West Yorkshire town were serenaded by a mystery musician as the supermoon shone above them.

Anyone in Hebden Bridge may have heard Moon River being played on a brass instrument as another day in lockdown came to a close on Tuesday night.

Resident John McMahon told the PA news agency: “My fiancee and I were doing the washing up prior to bed. Over the sploshing, we heard the faint strains of music.

“At first we thought our neighbours were listening to jazz – but that would’ve been out of character at 11pm.

“We ran upstairs and flung a window open to listen, rapt, to their Moon River serenade.

“It seems most of the neighbours were doing the same, as the final notes were met with warm applause and shouts of gratitude.”

The music was courtesy of Becca, 47, of Phatbass Music, as she played her flugelhorn on her street.

Becca, who did not want to give her surname, said she recently began to play music without a backing track, due to the loss of her phone, and realised the acoustics outside her house were suitable.

She told PA: “I realised just playing outside my house the other day that it bounces back all over the valley.

“And wouldn’t it be fun, because we can’t get together and I’m missing playing for people, to actually play in the valley and go out and find where the echoes are?”

Mr McMahon, 39, said he was “moved and delighted in equal measure, and a bit misty-eyed, too” by the music.

He added: “For me, three of the principle duties of the arts are to connect people, to foster understanding and reflection, and to imagine new possibilities for how life and society could or should be.

“This powerfully hit all of those.”

Becca said the response to her performance had been “really beautiful, because we’re all feeling really disconnected from one another” and she has had requests for more.

However she plans to change one aspect of her performances: “I might start a bit earlier so I don’t keep people awake.”