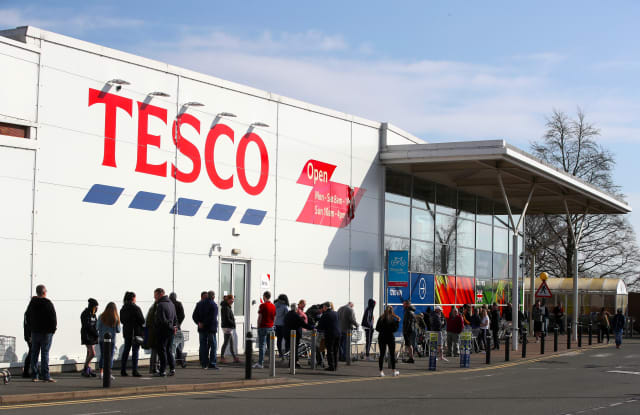 Tesco has said that “significant panic-buying” in recent weeks cleared its supply chain of certain items as sales jumped by 30%.

The supermarket giant said supply has now stabilised across the group as it reported its latest annual figures.

Tesco committed to paying shareholders a final dividend of 6.15p per share, totalling £635 million, after posting a surge in profits.

The payout comes after the retailer secured around £585 million worth of business rates relief from the Government for the current financial year, which was announced by the Chancellor as part of his business support package.

Bosses at the retailer said surging demand resulted in the sale of six million tins of baked beans, 3.3 million tins of tomatoes and 3.6 million packs of toilet roll each week as stockpiling increased.

It said 10% of shoppers bought 30% of products while it also reported stockpiling was most prevalent in the South East.

It added that the company has recruited 45,000 more staff members in the past two weeks in a bid to cope with soaring demand.

Numerous workers have been recruited as drivers and pickers to help expand its delivery business.

Dave Lewis, chief executive of Tesco, stressed that ensuring deliveries can be made to the most vulnerable customers is a “live issue”, with the Government providing the supermarket with an initial list of 110,000 people to reach out to.

Mr Lewis said: “Covid-19 has shown how critical the food supply chain is to the UK and I’m very proud of the way Tesco, as indeed the whole UK food industry, has stepped forward.

“Initial panic-buying has subsided and service levels are returning to normal.

“There are significant extra costs in feeding the nation at the moment but these are partially offset by the UK business rates relief.

“Tesco is a business that rises to a challenge and this will be no different.”