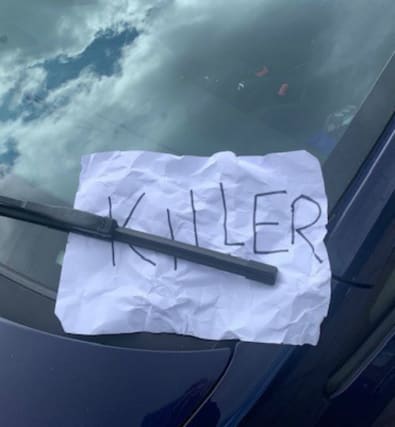 A care worker has spoken of the upset caused by people shouting abuse and spitting at her and colleagues as they visit vulnerable people in their homes.

Leigh Collins, who works for Crescent Community Care in Portsmouth, Hampshire, said she was left in tears when someone left the message “killer” on her car.

She told PA: “Carers across the board have been feeling the strain.

“When you do get people leaving ‘killer’ messages on your car, you feel like crying.

“Fear does strange things to people. It’s a small minority that is doing it, we are grateful to people who do support us, it’s just a few who spoil it.

“Unfortunately with that sort of business going on, it makes it very difficult.

“I would just like them to stop and think before they say something, if they are not there to care for their family members, we are the people who go in there and do that. If we weren’t there, the situation would be much worse.”

Ms Collins, 29, said that many of the elderly people she cares for are coping well with the lockdown but some are “panicked” and “sinking” due to being isolated from their families.

She said: “We are facing people who are cut off completely.

“Their emotions are running very high, you can imagine the fear they are feeling, we try to support them the best we can.

“Some of them are being brilliant, real rock stars, they are just saying ‘That’s the way it is, we will have to be bored’, they are trying to find the other side.

“But they can’t see families, they are worried about food, there is panic over whether there is milk for their cup of tea, particularly if they do not have family nearby.

“There are lots of different emotions, some are panicked, you try to give people some reassurance and you are doing everything possible.

“You want to walk out leaving a smile but at the moment it’s very difficult to do that, it’s very sad when they appear to be sinking.”

Ms Collins said her employer is doing its best to provide personal protective equipment, but said it is a difficult task to source enough masks, visors, hand sanitiser and aprons.