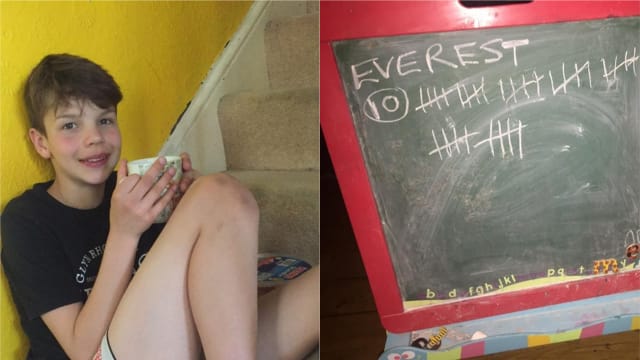 A 12-year-old boy managed to climb the peak of Everest — without even leaving his house.

Seth Charles, from Sheffield, set himself the task of climbing his stairs 2,507 times after the coronavirus pandemic meant he had to rethink his planned climb of Scafell Pike.

Seth had originally planned to climb the mountain to raise money for a trip with his boxing club, Sheffield Boxing Centre.

The group of amateur boxers are hoping to go to San Francisco on a training camp, although it is not yet known if this will also be rescheduled due to the pandemic.

After the UK was placed into lockdown, with all non-essential travel banned, the family worked out how many times he would need to climb the stairs to achieve the height of Everest from sea level.

The climb took Seth just under 24 hours — he started at 5.30am on Tuesday and finished at 4.45am the following day.

His mum Rachael told the PA news agency: “I just couldn’t believe that he carried on going, I was just dead on my feet just being there and helping him count. But he did it.”

The keen boxer, who last year got through to the finals of the national championships, completed the hike in one day, only stopping to break for food.

He was supported by his younger sister, who kept a tally for him.

Rachael said: “We originally thought it would take him 10 hours, but realised we had got our maths wrong.

“His legs are quite stiff today, but they’ve trained him quite well at this boxing centre. They do stairs there, but they’ve never done that amount before.”

The hike is just one of a number of fundraisers the boys at the centre are doing to raise money for the training camp.