Bat with torn wing is rescued by RSPCA 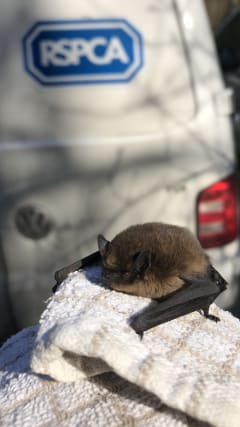 A bat that tore its wing and cannot fly is expected to make a full recovery after it was rescued by the RSPCA.

The tiny mammal was found in a King’s Lynn car park in Norfolk by a passer-by who called the animal welfare charity on Saturday.

The member of the public was advised to keep the bat safe and secure until dusk, allowing it time to rest, before seeing if it was able to be released and fly away once dark.

Unfortunately, the bat was still unable to fly, and so RSPCA Inspector Jason Finch was called to help.

“The caller did the right thing in keeping the bat safe until dusk, and seeing if he was able to fly,” said Mr Finch.

“Wild animals benefit from having as little contact with us humans as possible, and if he was able to fly off that would have been the best for him.

“However, he was clearly in need of help when he still wasn’t able to fly that evening, so I collected him in a box from outside the caller’s home, and took him to RSPCA East Winch wildlife centre.

“After being examined, it seems he has a tear to the very fine skin on one of his wings, but with some rest and care, he is otherwise bright and alert, and should make a good recovery and be able to be released in time.

“He was lucky to have been found by the person who called us for help, they undoubtedly saved his life.”

British bats will generally enter hibernation around early October and emerge any time from March to late April and into May.

Timings are dependent on the species, weather, location and food supply and so will differ year on year.

Bats do sometimes wake up during the hibernation season, especially when the temperature is warmer.

Adult bats can be mistaken for babies as people don’t realise how small they can be, the RSPCA said.

If you suspect you have found a baby bat, call the Bat Conservation Trust, who can put you in touch with your local bat carer, on 0345 130 0228.

The charity advised people to treat baby bats carefully, handling with gloves or a soft towel if you have to pick it up.

Remember where you found the bat as it may be possible to return to its mother.