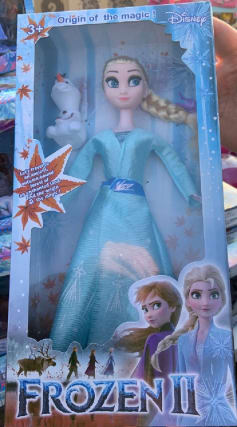 Parents are being warned to check their children’s toys, after fake and dangerous Disney Frozen II dolls were found being sold at a market.

Trading Standards officers seized the toys, which after testing were discovered to contain banned chemical phthalates, which has been linked to asthma, allergies and reproductive problems.

The set also had a battery-operated removable electronic voice box.

The battery itself was only fastened with sticky tape, which could be easily removed by a child who then might swallow it.

Both were being sold at Wellesbourne Market near Stratford-upon-Avon, in the days before lockdown.

Parents who inadvertently bought the toys are being urged to stop children playing with them and contact Trading Standards by phoning the Citizens Advice consumer helpline on 0808 223 1133.

Neither toy had details of the manufacturer or importer on the packaging – a legal requirement – making it difficult to trace how it entered the country and where it has been sold.