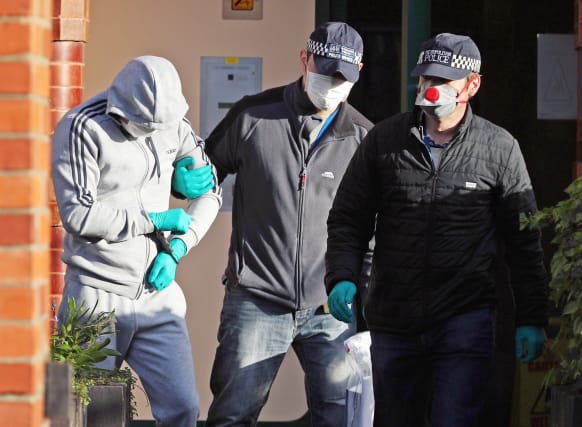 Two men, aged 24 and 29, were arrested on suspicion of burglary.

The warrants form part of an investigation led by detectives from three of the Metropolitan Police’s neighbouring basic command units (BCUs), supported by the Flying Squad.

The investigation was launched following a number of offences committed over the space of four months, between November 2019 and March this year.

In each case, the offenders either targeted people on their driveway in an attempt to steal their high-value watches, or they targeted safes located within empty properties containing high-value jewellery.

In the majority of cases, victims have been threatened with weapons including knives, batons, hammers and axes.

Those arrested on Tuesday had been linked to a burglary which took place in Courtleigh Avenue, Barnet, on November 24 last year.

Burglars forced their way into an empty house, ripped a safe out of the wall and threw it through a window into the garden before fleeing the scene with it.

Police said the safe contained thousands of pounds worth of jewellery.

Detectives investigating the offence identified three suspects who were targeted in the warrants.

The two men were taken to a north London police station where they remain in custody.

She said: “Even during this hugely challenging time for us all, I want to reassure the public that the Met remains utterly committed to providing an excellent service to London.

“We are here. We will continue to serve our communities across the capital and remain focused on our number one priority – reducing violent crime on the streets of London.

“This investigation is an excellent example of how officers across the Met are working together to identify those intent on carrying out audacious offences, putting the lives of innocent members of the public at risk.

“Rest assured, operations of this nature are taking place across London on a daily basis.”