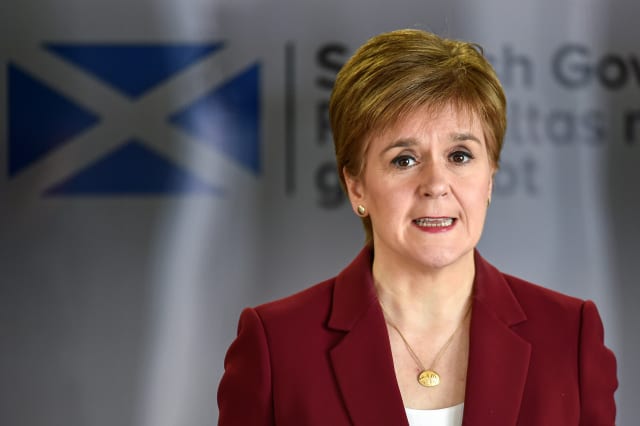 Nicola Sturgeon has wished the Prime Minister well as he battles coronavirus in intensive care, saying: “We are all willing you on Boris, get well soon.”

The First Minister issued the message of support to Mr Johnson and his family on behalf of the Scottish Government and the people of Scotland while he continues to fight the Covid-19 infection.

Speaking at the daily press briefing, in which she announced the recorded death toll from coronavirus in Scotland had risen by 74 to 296, Ms Sturgeon said the Prime Minister’s illness showed that the virus “simply doesn’t discriminate”.

She said the number of deaths recorded in past 24 hours is “relatively large” because the National Records of Scotland is moving to recording deaths seven days a week, having recorded just four deaths over the weekend, which she had said would be “artificially low”.

Ms Sturgeon said: “At times like this, things that divide us in normal times just seem so much less important and we are very much reminded of that again today.

“Right now, all of us are just human beings united in a fight against this virus.

“As we know, the Prime Minister – as well as leading the UK’s response – is currently in hospital fighting his own personal battle against coronavirus.

“I chaired a meeting of the Scottish Government’s cabinet this morning and we recorded our very best wishes to him.

“Now – and I’m sure I do this on behalf of all of Scotland – I want to send every good wish to him, his fiancee and to his whole family.

“We are all willing you on Boris, get well soon.”

On Tuesday afternoon, the Prime Minister’s spokesman said that Mr Johnson’s condition overnight was stable and he “remains in good spirits”.

The spokesman added: “He is receiving standard oxygen treatment and breathing without any other assistance.

“He has not required mechanical ventilation or non-invasive respiratory support.”

Stressing that the UK and Scottish governments would continue to work closely in their response to the disease, Ms Sturgeon said: “The Prime Minister’s illness will not affect us as people would expect, there will still be co-operation on key strategic decisions which take place, where appropriate, between the Scottish Government, the UK Government and the other devolved governments.

“My ministers have, for a number of weeks, joined UK ministers for regular meetings on health, public services and the economy, and that will continue.”