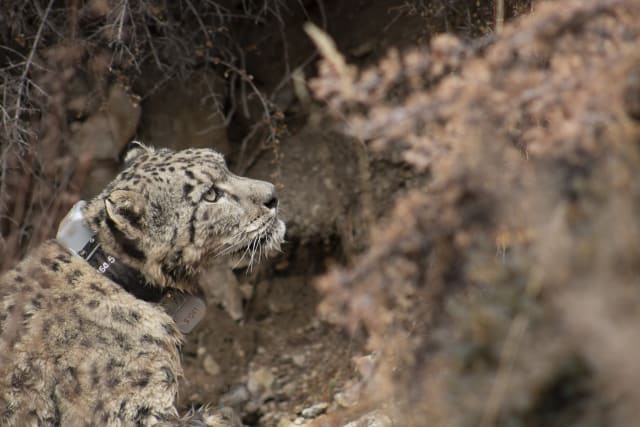 Two snow leopards in Nepal have been fitted with satellite collars to gather information that could help protect the threatened species.

The elusive mountain-dwelling cats are found in just 12 countries in Asia, where they face a raft of threats including loss of prey, poaching and illegal trade, conflict with local people and loss or deterioration of their habitat.

The team of local citizen scientists, national park staff, members of National Trust for Nature Conservation and WWF researchers collared Zeborong and Samling before releasing them back into the wild, in a first for the region.

Under the guidance of a wildlife vet the two adult animals were sedated and checks were carried out which showed both snow leopards were healthy.

Rebecca May, WWF-UK regional manager, Asia Programme, said: “Snow leopards are found in only 12 countries, and there are estimated to be as few as 4,000 in the wild.

“We are proud to work with the government of Nepal on this ground-breaking project, which we hope will provide special insights into the lives of snow leopards in this area to inform conservation efforts.

“The information from the satellite collars will inform and improve conservation plans to better protect the snow leopards, providing information on behaviour, movement and habitat use.”

Snow leopards, found in countries including Nepal, Afghanistan, China, India, Russia and Kazakhstan, are listed as globally vulnerable to extinction.

In Nepal work is under way to protect the animals.

Nepali mountain communities consider the snow leopard to be a mountain deity, a belief which conservationists say helps ensure its long-term survival.