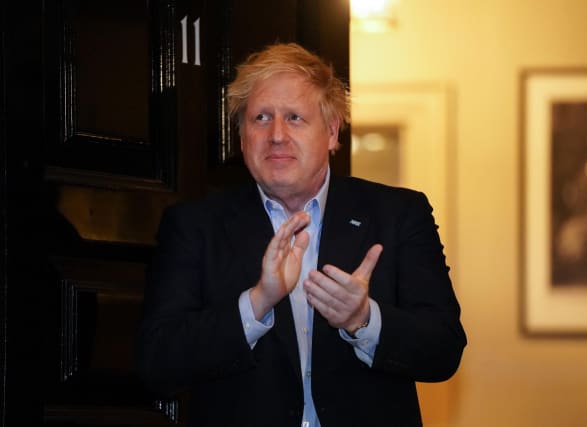 Foreign Secretary Dominic Raab has said he is “confident” Boris Johnson will pull through after being admitted to intensive care following a worsening of his coronavirus symptoms.

Mr Raab, who is deputising for the Prime Minister during his absence, said the news on Monday evening that he had been transferred to an intensive care bed at St Thomas’ Hospital had come as a “shock” to ministers.

However, speaking at the daily No 10 news conference, he said the entire Cabinet was united around the approach set out by Mr Johnson for tackling coronavirus.

The government’s chief scientific adviser Sir Patrick Vallance said there were signs that the rates of new of infections and new hospital admissions for Covid-19 were “flattening off”.

But in an indication that the current lockdown measures would have to continue beyond the three-week review due next week, he said it would be another “week or so” before they could be sure.

Mr Raab said Mr Johnson – who is facing a second night in intensive care – remained in a “stable” condition and had not required to be put on a ventilator.

“I’m confident he’ll pull through because if there’s one thing I know about this Prime Minister, he’s a fighter and he’ll be back at the helm leading us through this crisis in short order,” he said.

He said that ministers would not “blink or flinch” from following the instructions Mr Johnson had set out before he was hospitalised.

But he appeared reluctant to say whether he would be prepared to take a decision to break with the Prime Minister’s strategy while he was still in hospital if he believed a change of direction was necessary.

“He’s asked me to deputise for him for as long as is necessary, but the normal Cabinet collective responsibility and principles that inform that will apply,” he said.

The latest official figures from the Department of Health showed that 6,159 patients have died in hospital after testing positive for coronavirus in the UK as of 5pm on Monday – an increase of 786 on the previous day.

However Sir Patrick said there were signs the number of new cases “could be moving in the right direction”.

“It’s possible that we’re beginning to see the beginning of change in terms of the curve flattening a little bit. We won’t know that for sure for a week or so,” he said.

He said that the demand for intensive care beds should not now exceed the capacity of the NHS.

Mr Raab stressed however that they could not consider easing the lockdown restrictions until it was clear the peak of the epidemic had passed and it could be “responsibly done”.

“The critical thing is to take evidence-based decisions and so we’ve said that we will take any review once we’ve got the evidence that the measures are working,” he said. “We’re not at that stage yet.”

Following a question about what could be learned from Germany, where the rate of growth in the number of deaths has been much slower, England’s chief medical officer Professor Chris Whitty said: “We all know that Germany got ahead in terms of its ability to do testing for the virus and there’s a lot to learn from that and we’ve been trying to learn the lessons from that.”