High-profile names who have been affected by coronavirus 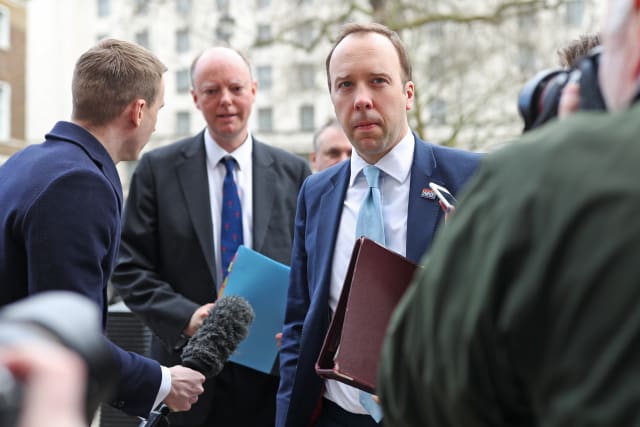 Prime Minister Boris Johnson was moved into intensive care on Monday evening as a “precaution” as his symptoms persisted – the first world leader to be hospitalised after testing positive for coronavirus.

Here PA looks at some other high-profile names who have tested positive for Covid-19 or suffered symptoms of the disease that “does not discriminate”.

The Health Secretary announced that he too had tested positive for coronavirus on the same day as the prime minister – March 27.

Mr Hancock returned to work after self-isolating for five days and has since led several press update briefings.

Following the announcements by Mr Johnson and Mr Hancock the Chief Medical Officer said that he had also displayed symptoms of coronavirus and would be self-isolating.

He returned to work on Monday.

Suggestions that the 48-year-old aide had previously talked of allowing elderly people to die to protect the economy during the pandemic were strongly denied by Number 10.

Mr Johnson’s fiancee said she had been suffering Covid-19 symptoms, but is now “on the mend”.

Ms Symonds, 32, who is expecting the couple’s first baby in early summer, said she was not officially tested for the virus.

Nadine Dorries was the first sitting member of Parliament to test positive for Covid-19, revealing the news on March 11.

Ms Dorries later said it took her seven days to “turn the corner” and begin to recover from the virus but returned to work on March 24.

Both the UK and EU’s chief Brexit negotiators, David Frost and Michel Barnier, tested positive for Covid-19 in March.

Perhaps the most significant international figure to test positive for coronavirus so far is the Prince of Wales.

Charles tested positive for Covid-19 on March 23 after experiencing mild symptoms. The 71-year-old royal immediately went into self-isolation at Birkhall in Scotland alongside the Duchess of Cornwall, who tested negative – but both have now returned to royal duties.

The Canadian prime minister’s wife tested positive for the disease on March 12 after returning from a trip to London.

She has now been given the all clear, but Mr Trudeau says he will remain in self-isolation with his children – they have shown no symptoms so far.

Major Hollywood actors Tom Hanks and Idris Elba have both recovered after testing positive for the virus.

Hanks was the first A-lister to say publicly he had caught the disease, along with his wife Rita Wilson while they were in Australia on March 11, and Elba is still “asymptomatic” after finishing his quarantine period. Elba had been at an event with Sophie Trudeau recently.

Harry Potter author JK Rowling said she suffered “all symptoms” of coronavirus and has now “fully recovered” – although she was not tested.

Singer Pink revealed that she and her three-year-old son Jameson had spent the previous fortnight battling the disease.

Arsenal manager Mikel Arteta tested positive but has now recovered, and players from several premiership sides have self-isolated as a precaution.