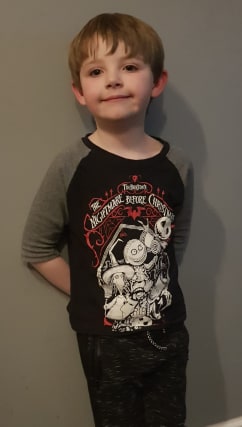 A boy who dreams of joining the police when he grows up was over the moon when officers sang happy birthday to him from outside his house as he turned five.

In a video posted on Facebook, a convoy of four marked patrol cars with their lights flashing pulls up outside the house of Jessica Vidler and her son Loki in Heybridge in Essex.

As officers get out of the vehicles, the sirens stop and “happy birthday” starts to blare out of the lead car’s loudspeakers.

As a delighted Loki stands with his mother in the doorway, which is decorated with helium balloons, the officers sing to him then cheer and applaud.

Ms Vidler had originally made contact with officers to ask for a video for Loki’s birthday, but they decided to do one better and work him into their patrol schedule for the day on Monday.

Essex Police wrote on its Chelmsford and Maldon Facebook page that officers surprised Loki “from a safe distance” while conducting patrols, adding: “Hopefully we brightened up his day in these unprecedented times.”

Ms Vidler said: “I was desperate to get him a video of a police officer singing happy birthday.

“Loki just loves the police, he is obsessed with officers putting the baddies in jail and he wants to be a police officer when he grows up.

“My sister is going to buy him a walkie talkie and handcuffs when we can all get out.

“He was beaming for the rest of the day.

“The officers are amazing.

“It was just a few minutes and it made Loki’s day.

“I must thank them for everything, they put themselves on the line to keep people safe.”

“This was a really kind gesture by my officers who were carrying out their patrols.

“We’re all human and small things like this really put smiles on our faces.”