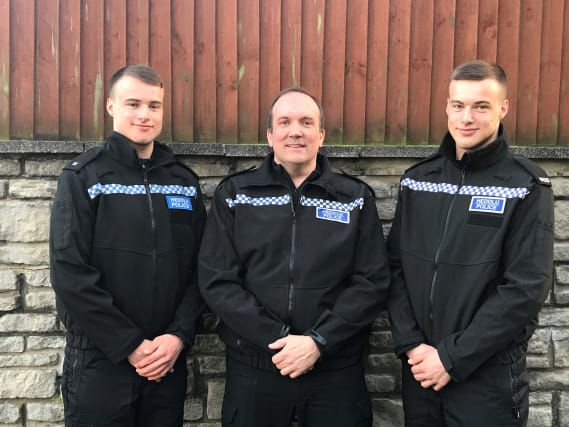 Criminals might soon be seeing double as identical twins have both joined the police.

Jack Herbert has signed up with Dyfed-Powys Police, while his brother Tom joins their father Jason in South Wales Police.

The 19-year-olds have wanted to join the police since childhood, having heard tales from the frontline from their father, a chief inspector.

Jack said: “Tom and I have always been close and we have both wanted to join the police for some time.

“Dad has always been vocal about how much he enjoyed his policing career. I’m not sure how much was story and how much was truth, but I’m sure I will find out.

“He has always has a group of close friends in the police, and we always watched documentaries on the TV when we were younger.

“I can see that policing has its good and bad points, but overall the camaraderie and sense of belonging was obviously strong. I can see that already in the short time I have been in.”

For Tom, seeing the enjoyment his dad got from his job inspired him to apply.

“I’ve wanted to join the police ever since I can remember,” he said.

“I can only ever remember dad being a police officer. He always came home happy from work, and it’s clear to see he has fun even though he works long hours.”

Although the twins have the long road of initial training to complete before they start patrolling the streets, both are looking forward to helping their communities.

But they do not underestimate the challenges that joining the police while in their teens will bring.

“I’m looking forward to getting out and making my first arrest – I can’t wait to go out on shift and start policing,” Jack said.

“It’s going to be hard because I am the youngest in my class. I am sure I will fit in but having watched some of the documentaries, the public may not take too kindly to my age.”

For Tom, the pressure comes not only from being one of the youngest in his cohort of recruits, but the legacy of his dad’s position in the same force.

“I am young, and dad is a chief inspector in my force, that brings some pressure,” he said.

Wherever their careers take them, the brothers know they will always be able to turn to their dad, and each other, for support and advice.

Their father, who has spent 16 years with South Wales Police, was surprised when his sons decided to join the policing family.

“I always thought they would go to university to study business first, but as they went through their A-levels they turned to wanting to be officers without degrees,” he said.

“As it happens they will get both now. I was surprised, but hugely proud.

“I still love policing as much as the day I joined and can’t wait to share their stories when they go out on the front line.

“The differences between the two forces will be evident with them joining so close together.”