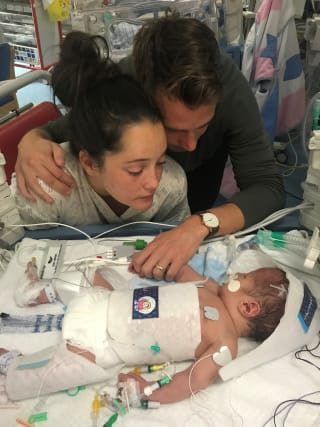 “Recurrent safety risks” around clinical care at an embattled NHS trust’s maternity service have been identified in a report published on Tuesday.

Among those treated at the trust was Harry Richford who died in a “wholly avoidable” tragedy, seven days after his emergency delivery in November 2017, an inquest found.

Speaking to the PA news agency on Tuesday, Harry’s grandfather Derek Richford said it is clear that sufficient lessons were not learned from his death.

The independent report, published on Tuesday by the Department of Health and Social Care, discusses 24 maternity investigations undertaken since July 2018, including the deaths of three babies and two mothers.

It said: “These investigations have enabled HSIB to identify recurrent safety risks around several key themes of clinical care in the trust’s maternity services.”

The investigation began in July 2018 with inspectors visiting the two hospitals where the trust provides maternity services: William Harvey Hospital in Ashford and the Queen Elizabeth the Queen Mother Hospital in Margate.

In the 18 months to 31 January 2020, 24 maternity investigations commenced of which eight remained underway.

The report says HSIB “engaged frequently” with the trust and presented evidence of safety concerns.

It adds: “Despite repeatedly raising these concerns with the Trust, HSIB investigators continued to see the same themes reoccurring and in August 2019, asked the Trust to self-refer themselves to their CCG and the CQC.

“The Trust has since responded to HSIB safety recommendations by making changes to their maternity services.”

According to the report, a broad range of contributory factors relevant to the safety of maternity care were identified from the 16 completed investigations.

These are “not unique” to the Kent trust and have been observed in trusts throughout England, the report says.

– Concerns related to the unavailability of staff with suitable skills in reading and interpreting CTG (cardiotocograph) results
– The location of equipment vital for neonatal resuscitation “added delay, risk and distress to critical situations”
– Deterioration in the condition of mothers and babies had occurred in several cases because staff had not recognised the signs and symptoms that indicate deterioration
– Suggestion of a reluctance of midwifery staff to escalate concerns to obstetric and neonatal colleagues

Speaking to the PA news agency, Mr Richford on Tuesday criticised the trust and lamented that other families had faced the same tragedy that his had following the death of his grandson.

He said: “The same themes that caused Harry’s death have clearly caused other families to lose babies and mothers.

“The Kirkup inquiry starts on April 21 and I am confident that it will discover the depth of culpability of the main board.”

Mr Richford has previously called on trust chief executive Susan Acott to quit over the failings in the care of his grandson and other babies.