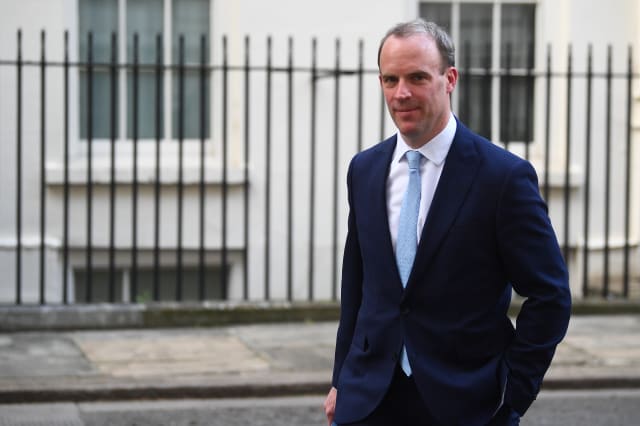 When Cabinet ministers dial in for their daily emergency coronavirus conference call on Tuesday morning, there will be a different face at the helm.

With Downing Street confirming that the Prime Minister has been transferred to intensive care after his coronavirus symptoms worsened on Monday afternoon, Boris Johnson has put Foreign Secretary Dominic Raab in charge of running the Government “where necessary”.

In his role of First Secretary of State, Mr Raab has taken up the role of deputising for the ill prime minister.

His first job on Tuesday will be to chair the emergency daily Covid-19 Government meeting which sees senior Cabinet ministers and the UK’s chief medical officer, Professor Chris Whitty, and chief scientific adviser, Sir Patrick Vallance, discuss the direction for the day.

The former Brexit secretary is also expected, according to the Institute for Government, to be handed Mr Johnson’s Red Box of daily briefing papers as he looks to continue the plan of action set by the PM for dealing with coronavirus.

Mr Raab may choose to face journalist questions at the afternoon press conference at Number 10 as well, although Downing Street stressed that the minister behind the podium is chosen based on the policy work being pushed by the Government on that given day.

With it unknown how long Mr Johnson will be in intensive care for, questions remain about whether the 46-year-old would stand in for his boss on the weekly call between the PM and the Queen.

Catherine Haddon, a senior fellow at the Institute for Government, said a vital part of Mr Raab’s role would be to unite senior members of the Cabinet.

She said, given Mr Raab’s comments following the news of Mr Johnson’s deterioration, the policy towards dealing with the pandemic was unlikely to change drastically.

Mr Raab, in an interview following the PM’s admittance to intensive care, said the “focus of the Government will continue to be on making sure that the Prime Minister’s direction will be taken forward”.

Speaking to the PA news agency, Dr Haddon said: “Ultimately, it is the Cabinet as a whole that takes decisions so part of Mr Raab’s role will be managing Cabinet ministers and bringing Government decisions together.

“It will be the senior Government ministers who already chair various Cabinet committees dealing with the response – (Cabinet Office Minister) Michael Gove, (Health Secretary) Matt Hancock – and so part of it will be co-ordinating with them and working with them.

“You’d expect the Cabinet to be working closely together, especially those senior ministers who are most closely involved, to try and get through this period and hoping it is only a few days and the Prime Minister recovers swiftly.”