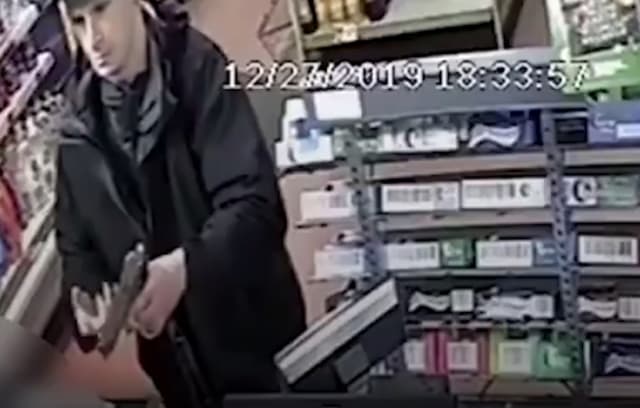 Police have praised a “courageous” shopkeeper who chased off a potential armed robber after he tried to raid his store at gunpoint.

Christopher Allison, 31, was caught on CCTV pointing a blank-firing handgun at the worker at the Best One shop, in Concord, Washington, in the attempted robbery in December.

But the shopkeeper leaned over the counter and tried to grab the gun before chasing Allison out of the store empty-handed.

In a statement read out in court, the shopkeeper said he thought Allison could have killed him.

He said: “When the man pointed the gun at me, I felt like it might be the last day of my life.

“He seemed nervous. I kept thinking he was so nervous he might have killed me.”

Detective Constable Lauren Urwin said: “First and foremost, I would like to commend the shopkeeper for the incredible bravery that he showed when finding himself in an incredibly hostile and distressing situation.

“While we would never encourage members of the public to do anything that puts themselves in harm’s way, the victim in this case was put in an incredibly difficult position and was unaware the weapon was an imitation.

“He should be very proud of his actions.

“Christopher Allison proved himself to be a dangerous individual who put his own selfish needs over the welfare of others.

“While nobody was injured in this particular incident, he must realise the significant and harmful effect that his behaviour can cause for victims and their families.

“I am pleased that the judge has now handed him a custodial sentence, and he now must deal with the very serious consequences of his actions.”