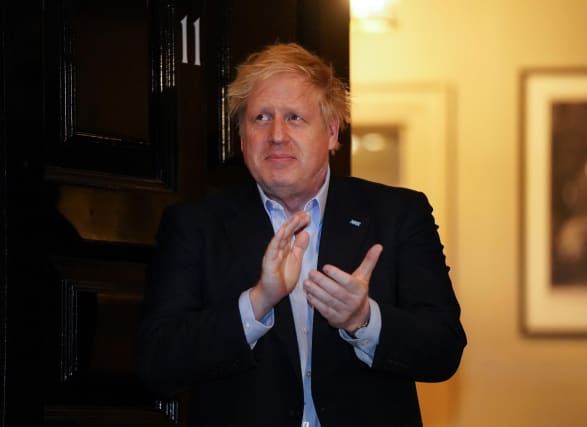 Boris Johnson remains in hospital following his admission on Sunday with continuing coronavirus symptoms, as ministers resisted pressure to set out an “exit strategy” from the lockdown.

Foreign Secretary Dominic Raab said the Prime Minister remained in charge of the Government despite remaining under observation at St Thomas’s Hospital, London.

But at the daily Number 10 news conference, he faced repeated questions as to how Mr Johnson could cope with demands of the premiership if he was sick enough to require hospital treatment.

Earlier Downing Street, which had previously described his symptoms as “mild”, switched to describing them as “persistent”.

They included a cough as well as a continuing high temperature, 10 days after he first tested positive for the coronavirus.

Meanwhile, the latest official figures showed 5,373 patients have died in hospital after testing positive for coronavirus in the UK as of 5pm on Sunday – and increase of 439 on the previous day.

The Prime Minister’s official spokesman said Mr Johnson had been taken to hospital on the advice of his doctor and as a “precaution”, and that it was not an emergency admission.

The spokesman said that he remained in touch with colleagues in Number 10 and that he was continuing to work from his bed on official papers delivered in his ministerial red box.

Mr Raab, who as First Secretary of State stood in for the Prime Minister at the Government’s daily coronavirus “war cabinet”, said his team were continuing to work “full throttle” to ensure his instructions were implemented.

“He’s in charge, but he’ll continue to take doctors’ advice on what to do next,” he said.

“I spoke to the Prime Minister over the weekend. He is being kept abreast of all the relevant developments.”

In a tweet, Mr Johnson confirmed he was still showing symptoms of the virus but said he remained in “good spirits”.

“Last night, on the advice of my doctor, I went into hospital for some routine tests as I’m still experiencing coronavirus symptoms,” he said.

“I’m in good spirits and keeping in touch with my team, as we work together to fight this virus and keep everyone safe.”