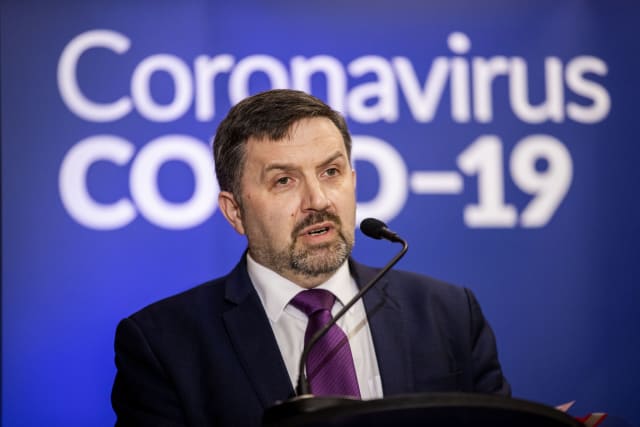 A man has been arrested over online sectarian threats made against Stormont health minister Robin Swann.

A pro-IRA slogan was sent via social media.

Police said they were investigating “offensive” comments posted on Friday.

Mr Swann has been leading the battle against coronavirus.

A 26-year-old was detained in the Ballymena, Co Antrim, area on Sunday on suspicion of improper use of telecommunications causing anxiety and later released on police bail pending further inquiries.

A Police Service of Northern Ireland (PSNI) statement said: “The investigation is ongoing.”

The force added: “Police are investigating after threatening and offensive comments were made on a social media platform on Friday 03 April.”

Mr Swann is a former leader of the Ulster Unionists and represents North Antrim at the Stormont Assembly.

UUP leader Steve Aiken said: “It is utterly despicable that threats that were blatantly intimidating and sectarian were made against our exceptionally hard-working and dedicated health minister.”

He called on all Stormont Executive ministers to come out and condemn it.

“Especially at a time when we are focused on protecting life and getting Northern Ireland through Covid-19.”

“In very turbulent and challenging times, there is no place for this nonsense as we work together to save lives.”

SDLP leader Colum Eastwood said the minister was working “night and day” to reduce the impact of coronavirus on communities.

He said: “The vile sectarian abuse and threats that he and his family have been subjected to are disgusting and those responsible must be held accountable.”