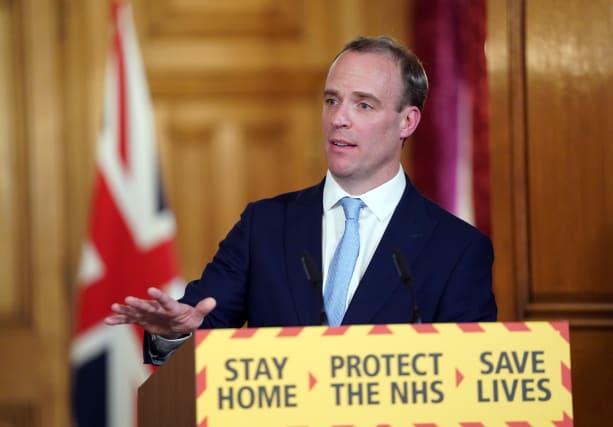 A decade ago, Dominic Raab was readying himself for a possible career in frontline politics. On Tuesday, he will dial in to Cabinet as de factor Prime Minister of the United Kingdom.

The Foreign Secretary has spent much of the last month trying to get Britons repatriated from various far-flung corners of the globe amid the coronavirus outbreak.

The intricacies of negotiating border closures, grounded planes and stubborn international authorities has seen the Foreign Office come under increasing pressure to get its stranded citizens home.

But, in his dual role as First Secretary of State, Mr Raab will take on the added responsibility of caretaker prime minister while his boss, Boris Johnson, is unable to lead the country from the Intensive Care Unit at St Thomas’ hospital in central London.

Upon being appointed Foreign Secretary last summer, Mr Raab was soon thrust into handling the Transatlantic fall-out over the death of British teenager Harry Dunn, who was killed when his motorbike crashed into a car outside RAF Croughton in Northamptonshire on August 27 last year.

The fact Mr Dunn’s parents tried to heckle Mr Raab at a constituency hustings event was indicative of how well the family felt he dealt with obtaining justice for their son.

Mr Raab also had to manage the thorny issue of repatriating children of British jihadis.

By then, he had already established himself as an uncompromising figure in politics following his election to the seat of Esher and Walton in David Cameron’s sweeping Conservative victory of 2010.

He said he would “probably not” describe himself as a feminist, and rarely strayed from his dedication to leaving the European Union – the latter, an enviable characteristic for a Conservative government elected four months ago on a mandate to “get Brexit done”.

The former Brexit secretary’s relentless commitment to the cause even led to him saying he would keep open the option of suspending Parliament in order to prevent MPs blocking it.

In fact, Mr Raab memorably quit his Cabinet role in protest against Theresa May’s doomed plan to leave the bloc in November 2018.

The former Foreign Office lawyer, who studied law at Oxford and for a Masters at Cambridge, is the son of a Czech-born Jewish refugee who fled the Nazis in 1938.

He was brought up in Buckinghamshire and is married to wife Erika.

Mr Raab has denied claims, made by his former diary secretary, that he insisted on the same Pret a Manger lunch every day.

The “Dom Raab special” apparently consists of a chicken Caesar and bacon baguette, superfruit pot and a vitamin volcano smoothie.

The karate black belt and father to two boys played up his image as a Brexit hard man during the 2019 Tory leadership race, but failed to progress to the final two.

On Tuesday, his ambitions to lead the country will – temporarily, at least, and not in the circumstances he would ever have wished for – become reality.

Tributes paid to ‘wonderful’ nursing assistant who died with Covid-19

PM gets permission from the Queen to exercise at Buckingham Palace