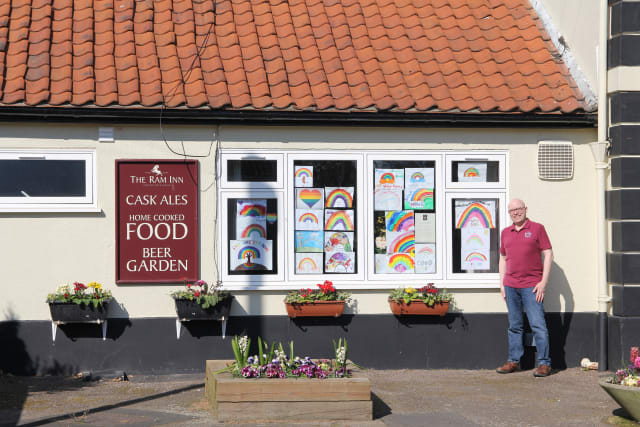 A pub in Norfolk is filling its windows with rainbow art from locals to raise money for a hospital.

The Ram Inn in Brundall is one of many pubs that have been forced to close during the coronavirus pandemic.

However, after the daughter of some of the pub’s regulars decided she wanted to put “a rainbow of hope” in the window, pub landlord Martin Burrekoven-Kalve, 53, and his husband decided to involve the whole community.

The pub now has more than 80 rainbow pictures in its windows drawn by locals – some just two years old, one from a residential care home – with more to come.

The pub will be donating a pound for each rainbow, with local customers and groups donating money too, all of which will go to the Norfolk and Norwich University Hospital.

“People have been stopping to take photographs outside as they take their daily exercise,” Mr Burrekoven-Kalve told the PA news agency.

“The best thing of all is that we’ve currently raised over £800.

“We actually do have a little bit of space for some more rainbows, so if anyone is taking their daily exercise and happens to be passing the pub, they can drop another rainbow through our letterbox, which by the way is regularly disinfected.”