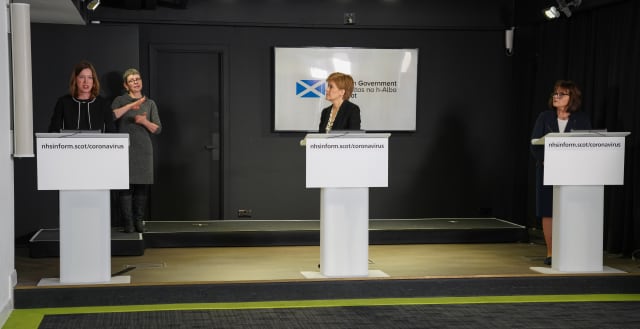 Scotland’s former chief medical officer Dr Catherine Calderwood failed to reveal a second visit to her holiday home during the coronavirus lockdown when the news broke, Nicola Sturgeon has said.

Dr Calderwood resigned on Sunday night, a day after photos emerged showing her flouting social distancing measures by visiting her second home in Fife with her family.

The Scottish Government had initially claimed in a statement that she “took the opportunity this weekend to check on a family home in Fife as she knows she will not be back again until the crisis is over”.

However, at Sunday’s press conference the CMO admitted she had visited the holiday home twice in the past two weekends, in direct contradiction of her guidance for Scots to remain at home and avoid unnecessary travel.

Questioned about the discrepancy, Ms Sturgeon revealed Dr Calderwood had only told her about one of the two visits on Saturday night, only disclosing the second trip the following day.

Ms Sturgeon said: “The statement that went out was a reflection of our understanding at that time of the reasons for her visit that weekend.

“That reflected the understanding we had, but she later made clear that there had been a second visit and, of course, made that clear at the briefing yesterday.”

The First Minister said the reasons for Dr Calderwood making the 44-mile journey between homes were “irrelevant” because “there was no justification for her having been at the house at one or two occasions because it was in breach of the guidance and advice that was issued”.

Ms Sturgeon had originally wanted Dr Calderwood to remain in post, arguing that losing her would be “damaging” to the government’s coronavirus response.

Deputy Dr Gregor Smith has been promoted to interim chief medical officer, with Ms Sturgeon explaining she wanted “as much continuity of advice as possible” until the permanent successor is appointed.

Ms Sturgeon added: “Gregor, as deputy chief medical officer, has been integrally involved in the development of our response so far, but of course we continue to take a wide range of advice from different scientific expertise and it’s important that continues.

“The consideration of a longer-term replacement will happen as soon as we get to a point in the development of this virus that we think we’ve got the ability to consider that properly.”