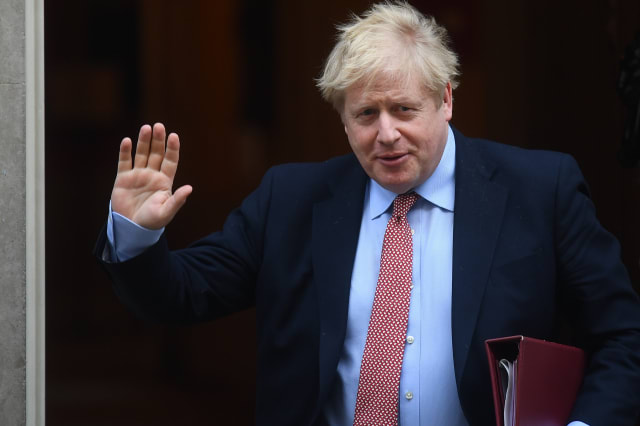 Politicians from across the spectrum have wished Boris Johnson well after the Prime Minister was placed in intensive care with severe coronavirus symptoms.

Newly elected Labour leader Sir Keir Starmer led messages of support from all the major party leaders, saying "all the country's thoughts are with the Prime Minister and his family during this incredibly difficult time".

The mayor of London, Sadiq Khan, added his wishes for a "swift" return to health.

St Thomas' hospital, where Mr Johnson is being treated, "has some of the finest medical staff in the world, and he couldn't be in safer hands," he added.

Mr Johnson had been working from isolation until his worsening symptoms led him to be sent to hospital, initially as a precautionary measure.

A number of Conservative colleagues urged their "boss" to get back to full health, while also offering their support to his fiancee Carrie Symonds, who herself is overcoming the virus.

Chancellor Rishi Sunak posted: "My thoughts tonight are with @BorisJohnson and @carriesymonds. I know he'll be getting the best care possible and will come out of this even stronger."

International trade minister Conor Burns, who previously served as Mr Johnson's parliamentary private secretary, tweeted: "You are a fighter and we need you back."

Former cabinet colleague Amber Rudd said she "received a characteristically ebullient, light-hearted, positive response from Boris over weekend when I wished him a speedy recovery".

"I now want to multiply those good wishes 100 fold and send him hopes and support for a healthy recovery."

And business minister Nadhim Zahawi tweeted: "Thoughts & prayers for @BorisJohnson & @carriesymonds and their family. I have known Boris for 20 years he is a fighter and will beat this virus."

Former chancellor Sajid Javid echoed the sentiment, responding: "Boris is one of the strongest people I know. Thinking of him, Carrie and his family tonight. Get well soon, the country needs you."

Friends and opponents of times past also offered their support, with former prime minister David Cameron tweeting: "Thinking of @BorisJohnson and his family tonight. Get well soon. You are in great hands and we all want you safe, well and back in @10DowningStreet."

And his previous Prime Minister's Questions opponent Jeremy Corbyn posted: "My thoughts are with Boris Johnson and his family tonight. Thanks to the #NHS staff for their hard work and dedication."

French president Emmanuel Macron was the first major leader to send his wishes, tweeting: "All my support to Boris Johnson, his family and the British people at this difficult time. I wish him well."

Spanish Prime Minister Pedro Sanchez, who is also battling a major coronavirus crisis, tweeted his "solidarity and wishes" to his UK counterpart.

"These are difficult days for our countries, but from strength and unity, we will be able to win this battle. A hug to all the British people," he added.

And Ireland's deputy leader Simon Coveney added: "Everyone in Ireland is tonight wishing @BorisJohnson well. This is a difficult time for the UK and it's Govt. We in #Ireland wish the PM a speedy recovery."

A Number 10 spokesman said: "Over the course of this afternoon, the condition of the Prime Minister has worsened and, on the advice of his medical team, he has been moved to the intensive care unit at the hospital.

"The PM has asked Foreign Secretary Dominic Raab, who is the First Secretary of State, to deputise for him where necessary.

"The PM is receiving excellent care, and thanks all NHS staff for their hard work and dedication."