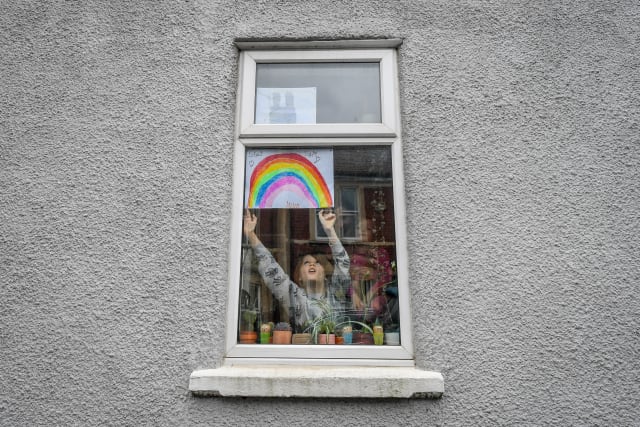 The Queen's historic televised address to the nation was a "calming message at a time of crisis", a royal expert has said.

Joe Little, managing editor of Majesty magazine, said the monarch made a "touching and heartwarming" reference to children's rainbows being the symbol of the national spirit.

He described the rare address as history repeating itself, with the Queen delivering the message from Windsor Castle, just as she did 80 years ago as a young princess in a radio broadcast during the Second World War.

The royal commentator told the PA news agency: "It's a calming message from the Queen at a time of crisis.

"Some might question the validity of such a thing in the 21st century, but clearly she is still seen by many as a matriarch, both here and in the other countries of which she is Queen.

"So people look to her at times such as this.

"Although she has witnessed so many catastrophes throughout her 68-year reign, she's never come across anything quite like this before."

The Queen spoke about the unprecedented nature of the coronavirus pandemic, saying: "While we have faced challenges before, this one is different."

Throughout the UK, youngsters have painted and drawn rainbows and hung them in their windows to raise the spirits of passers-by, while thousands across the country have taken part in the Clap for Carers tributes.

The Queen said: "The moments when the United Kingdom has come together to applaud its care and essential workers will be remembered as an expression of our national spirit; and its symbol will be the rainbows drawn by children."

Mr Little said of her reference to the rainbows: "It was quite touching and heartwarming."

He added: "She also talks about the speech she gave 80 years ago with Princess Margaret in October 1940 in the same Windsor Castle setting.

"It's quite remarkable that it should be necessary to speak about a world in turmoil 80 years later.

"It appears to be deeply personal but it is what you would expect her to say as head of state and head of the Commonwealth."

The message made no direct mention of the Queen's own family's experience of coronavirus.

Her eldest son the Prince of Wales contracted and recovered from the illness.

Mr Little said: "Perhaps mentioning Charles might have distracted from the other people that warranted her attention, such as the carers and key workers.

"I think the message was more as monarch rather than as mother."

The Queen's granddaughter Princess Eugenie praised the Queen's speech, posting on Instagram: "Thank you for your words, they bring us together and unite us in our effort to overcome."

Eugenie's mother Sarah, Duchess of York – the ex-wife of the Queen's son the Duke of York, said: "Her Majesty's words touched my core and inspired us to never give up."

Royal author Penny Junor said the Queen had shown the nation she is "with us in this dark hour".

Ms Junor said: "I thought it was superb. It really shows us what monarchy is all about.

"In the Second World War during the Blitz, the King and Queen chose to stay in London and stood shoulder to shoulder with the British public.

"There's the same feeling of solidarity here. She's with us in this dark hour.

"It's reassuring. It's calm, and the wisdom it shows is very inspiring."