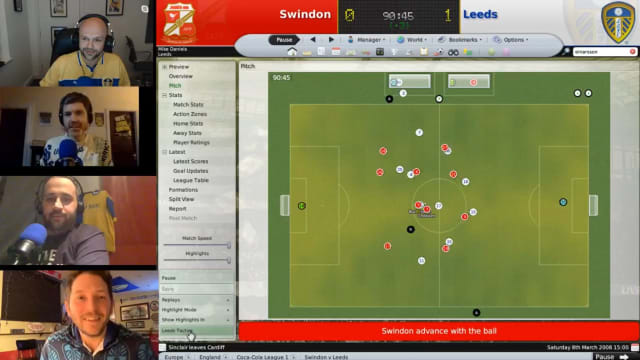 Three football fans have raised more than £12,000 for food banks by playing a management simulator game for 24 hours.

Dan Moylan, Daniel Chapman and Michael Normanton, who run the Leeds United fanzine and podcast The Square Ball, streamed their efforts live online as they played Football Manager from 10am on Saturday until 10am on Sunday.

And with guests joining them throughout the day and night – including comedian Jon Richardson – supporters donated a steady stream of money to Leeds Fans Foodbank, an organisation that supports two food banks in the city.

“We were wanting to do something that was available to us in the lockdown, something we could do from home that would probably kill a lot of time,” Mr Moylan, 41, told the PA news agency about the decision process which led to the fundraiser.

In the end they decided to replay the 2007/8 season as Leeds on Football Manager, a year when the club overcame a 15-point deduction to reach the League One play-offs but ended up losing the final to Doncaster at Wembley.

“The 2007 season was a pretty memorable one for Leeds, for many of the wrong reasons, but we thought it would be nice to try and go on a journey with that one and try and correct that particular wrong and get promoted,” Mr Moylan said.

Throughout the mammoth stint, the three – who each streamed their reactions from their homes via Skype – received messages from watching Leeds fans, who suggested tactical changes and potential signings.

Some even sponsored individual players, while one Leeds fan – who appears in the game as a young trainee goalkeeper – agreed to donate money if they signed him.

“It absolutely flew by,” Mr Moylan said. “I guess because we had something to concentrate on and other people to speak to.

“It went a lot quicker than you might think.

“But there was no point until the early hours of the morning when we actually got the promotion that I think any of us struggled.”

Although his two co-hosts stayed online for the full 24 hours, childcare commitments meant Mr Moylan had to disappear for a couple of hours’ sleep at one point.

“I got the usual pelters and friendly abuse,” he said.

But he was there for the moment in the early hours of the morning when they secured promotion with a play-off victory at Wembley.

To celebrate, Richardson even made an appearance on camera wearing only a Leeds United flag.

By Sunday morning, fans had contributed around £12,500 to a fund set up by the Leeds United Supporters Trust.

“We were just the vessel through which the money was collected – I don’t think we can take too much credit for playing a computer game,” Mr Moylan said.

“Genuinely, all credit to Leeds fans who step up time and time again – we saw it with the charity shirt auction that we did for Leeds Children’s Hospital, that got over £30,000.

“Leeds fans are thoroughly decent people, despite what you might read.”