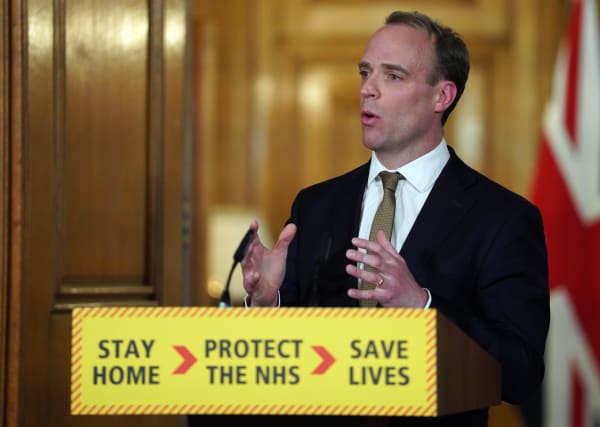 Foreign Secretary Dominic Raab has sent a “welcome back” message to Britons who had been stranded abroad during the pandemic.

His message came after more than 100 travellers, who had been in Ecuador and Bolivia – plus 150 who were in Ghana, touched down in Britain on special charter flights – but more travellers are still struggling to find their way home.

The Foreign and Commonwealth Office told their direct dependants it “is likely to be the last opportunity” to travel from those regions to the UK “for some time”.

The FCO has issued advice “against all but essential international travel” in the face of the growing number of border and movement restrictions being imposed around the world.

Here is the current guidance for some popular tourist destinations for Britons:

A special flight has been arranged from Nassau on April 7 for British tourists, short-term visitors and their direct dependants to return to the UK.

Many airlines have either suspended all international flights or are no longer flying to the UK, while Air Canada is running a reduced schedule to London throughout April.

Three flights have been chartered by the Government to fly back to London on April 8, 10 and 12 from Goa, and on April 9 and 11 from both Mumbai and Delhi.

Seats have to be secured in advance with the British Embassy for a limited number of coaches which are periodically running from Prague to London until April 10. International air travel is now limited to Prague Airport, which remains open, but flights are being cancelled. There are currently no direct flights between Prague and the UK, and indirect flights may be cancelled at short notice.

The FCO warns that flights and medical evacuation may soon not be available or become very expensive and urges Britons to leave on the remaining commercial routes which still have some spaces.

With no scheduled commercial flights set to depart from South Africa until at least April 17, the FCO says it is in contact with airlines and local authorities to ensure British nationals can return to the UK and urges returning travellers to contact them – at SouthAfricaBritishNationalReturns@fco.gov.uk – with their personal details. Port entry for UK visitors is banned and neither cruise liners nor smaller leisure vessels are permitted to dock in South African ports.

Commercial flights are still running to the UK from Spain and travellers are warned to return now and “don’t run the risk of getting stranded”.

Antigua and Barbuda, Bangladesh, Barbados, Colombia, Congo, Cuba and Grenada are among the places where there are no commercial options for Britons to get back home.

Austria, Australia, Jamaica, Japan and Hong Kong are among the destinations where there is still a limited chance to book commercial travel back home.