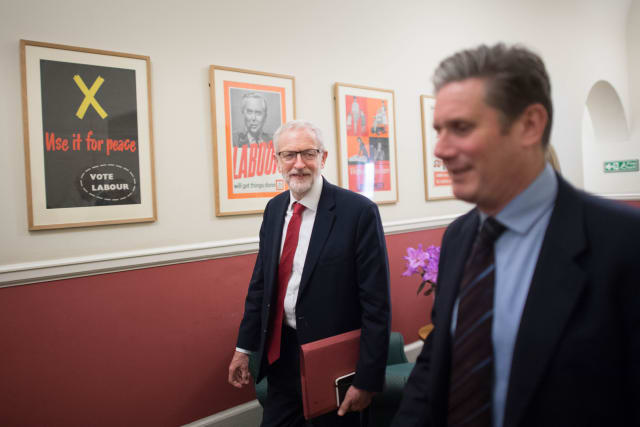 The runners-up in the contest have congratulated Sir Keir Starmer on his election as Labour leader.

Former leader Jeremy Corbyn also congratulated Sir Keir and his new deputy Angela Rayner, and Prime Minister Boris Johnson spoke on the phone with the new Leader of the Opposition.

In a tweet, Mr Corbyn said: “Being Labour Party leader is a great honour and responsibility.

“I look forward to working with Keir and Angela to elect the next Labour government and transform our country.”

Mr Johnson tweeted: “I have just spoken to @Keir_Starmer & congratulated him on becoming Labour leader. We agreed on the importance of all party leaders continuing to work constructively together through this national emergency. I have invited him and other opposition leaders to a briefing next week.”

Second-placed Rebecca Long-Bailey wrote on Facebook: “I want to pay tribute to Keir and to Lisa and their respective teams, who each led fantastic campaigns.

“Keir Starmer will be a brilliant prime minister and I can’t wait to see him in Number 10.

“I will do all I can to make that a reality and to ensure the Labour Party gets into government with a transformative agenda at the next election.

“We live in extraordinary and uncertain times and it is now up to all of us to support Keir as best we can.”

Third-placed Lisa Nandy said: “Congratulations to Keir and his team.

“We have been competitors in this contest but never opponents, and he will have my full support in the challenges that lie ahead.

“A united and strong Labour Party could not be more important than at this moment.”

Outgoing shadow chancellor John McDonnell tweeted: “Congratulations to Keir & Angela on their election & to Rebecca & Lisa for their excellent leadership campaigns & to Richard, Dawn, Rosena & Ian for the campaigns they waged with such comradeship & with such commitment. Let us unite now as a movement to achieve our socialist aim.”

Left-wing campaign group Momentum, which had backed Rebecca Long-Bailey for Labour leader, said it would “hold Keir to account and make sure he keeps his promises”.

In a statement on Twitter, it said: “Congratulations to @Keir_Starmer and @AngelaRayner on their election as leader and deputy. We look forward to working with you both to elect a Labour government that will carry out the kind of transformational policies our country needs.”

It added: “In this new era Momentum will play a new role. We’ll hold Keir to account and make sure he keeps his promises, champion big ideas like the Green New Deal, build the power of Labour members and do everything we can to get a Labour government elected.”

Labour London mayor Sadiq Khan said: “I’m delighted that Keir Starmer and Angela Rayner have been selected as the new leader and deputy leader of the Labour Party.

“This is an unprecedented time and our country faces extraordinary challenges. We are fighting with all we have to slow the spread of this virus, but it’s already clear that we will be dealing with social and economic consequences of Covid-19 for many years to come. The United Kingdom will, frankly, never be the same again.

“That just makes it all the more vital that Labour does its job by effectively holding the Government to account – and by making the changes clearly necessary to put ourselves back on the path to forming a Labour government again.”

She said: “The coronavirus is the biggest threat this country has faced in decades, so I call on Keir Starmer to put aside the divisiveness and infighting that has plagued the top of the Labour Party for the last five years, and work with the Government to support the national effort.”