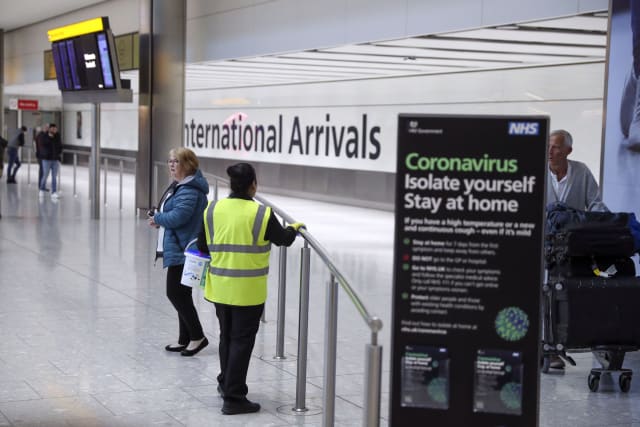 The lockdown has been tough for many but after a decade of austerity and four years of a nation torn in half by the Brexit debate, Covid-19 has reignited a sense of community in Britain.

We do not know when life will go back to normal but as neighbourliness, nature and air quality resurges, Britons might decide they do not entirely want it to.

Here are some of the changes the Covid-19 pandemic might bring.

The lockdown has left the travel industry in a parlous state with thousands of planes grounded, trains and coaches suspending routes and a rapid drop in use of bus and local train travel.

It has also revealed the extent to which technology has made a lot of business travel obsolete.

AA President Edmund King told the BBC: “People travelling up and down motorways just to hold meetings is inefficient, expensive and not good for the environment,” he said.

“I think use of roads and rail and indeed bus will be reduced after this crisis.”

Many people lucky enough to have desk-based jobs have reported the transition from office-based to home-based working to be relatively straight forward.

With the proliferation of conference apps like Zoom and Skype, video conferencing and remote working is a lot more reliable than it once was, and could potentially open up the workplace to people previously shut out.

James Taylor, head of strategy, impact and social change at disability equality charity, Scope, said: “Businesses that work flexibly thrive, so long may this continue after the pandemic has faded.”

The average Briton’s commute is around 58 minutes a day – 74 minutes in London – and post-shut down many will be sad to relinquish the extra few minutes in bed or a little more family time to be in the office for 9am.

More people are likely to ask to work from home one to two days per week, easing pressure on the transport system and reducing stress among the workforce.

Speedy internet has been a godsend for everyone stuck in doors.

But internet black spots are still common in rural areas, with the situation so bad that Rishi Sunak pledged to pump £5 billion into the rollout of full-fibre broadband in the latest budget in a bid to “level up” the UK.

He added: “The LGA has previously called for a ‘social tariff’ to ensure a basic service is available at an affordable price to those most in need.”

One of the benefits of the shutdown has been a rapid increase in air quality in cities as cars sit idle, and hundreds of people have remarked on how clear the birdsong is without the rumble of traffic.

Mayor of London Sadiq Khan said in a recent interview with the PA news agency lack of progress on toxic air is the biggest frustration of his time in office, despite measures introduced to limit the most polluting vehicles.

But the current change to the status quo might mean the Old Smoke and other UK cities are never quite the same again.

A spokesman for the Mayor’s Office said: “Once the current emergency has passed, our challenge will be to do all we can to have cleaner air at all times which is why schemes like the Ultra Low Emission Zone and the further roll out of electric vehicle charge points will be vital.”

Cash is no longer king in this age of infection as people contemplate just how many hands their notes have passed through.

Last month, the contactless limit was raised from £30 to £45 to allow shoppers to make larger purchases without having to punch their pin into a potentially dirty keypad.

While this is convenient for internet-enabled age groups and the salaried classes, it can spell difficulties for the elderly and those in the gig economy as banks shut their doors and ATMs are removed.

Gareth Shaw, head of money for consumer advice group Which? warned that the move towards cashless, while well-intentioned, could hurt vulnerable groups – particularly if initiatives like mobile bank branches are permanently withdrawn.

Independent grocery shops have experienced an unexpected renaissance during the Covid-19 crisis in an otherwise bleak outlook for the high street.

While images of empty shelves and tales of month-long waiting lists for deliveries from major supermarket chains have taken over social media, most corner shops have kept calm and well stocked.

Consumer intelligence company Springboard thinks it might mark a change in the way we shop.

Diane Wehrle, insights director at Springboard, said: “Now that they are once again familiar to consumers and being successful in delivering what is required,  this episode may well provide a much needed catalyst for shopping locally and supporting small stores.”

Now trips outside are strictly limited, many households are thinking of ways to make their shopping go that little bit further.

There has been a proliferation of articles on how to reduce waste and save cash in uncertain times, with Great British Bake Off star Nadia Hussain even teaching the frugal nation how to cook up banana skins.

There is also the issue of what overflowing bins mean for our health as councils cut back on collection and recycling services.

After years of political arguments and division, all of a sudden we are a nation dreaming up ways to help our communities.

From clapping the NHS, hundreds of thousands of people signing up as crisis volunteers or just getting to know your neighbours, the past few weeks have been full of stories of solidarity.

We could be in for a year of periods of greater and lesser social isolation as we wait for a vaccine to be developed and while  it will be tough, this time of crisis is bringing us all together.

Parents have found they are not only breadwinners, but also teachers and live-in entertainers for their children, placing a huge amount of stress on an already difficult situation.

One head teacher at a primary school in Essex advises parents not to put too much pressure on themselves.

“What this will show is just how much training teachers have to do their job,” she said.

“At the end of the day, parents should only try and teach their children what they are comfortable teaching them, and should focus on just keeping them happy and busy and using their brains.”

In the last few weeks the Government has pledged hundreds of billions of pounds to prevent the collapse of the economy – offering increased support to employees, self-employed and unemployed alike.

It has left some scratching their heads as to why it took a global pandemic for the Government to decide it is capable of spending its way out of some of our most pressing problems.

Dr Doug Parr, chief scientist for Greenpeace UK, said: “How we react in times of crisis, including the climate emergency, is an entirely political choice and the only thing standing in the way is how our government chooses to respond.

“We will get through the current crisis, and once that happens we can push the government to protect our planet and put the economy onto a safer and more sustainable footing – because we all know they have it in their power to do so.”