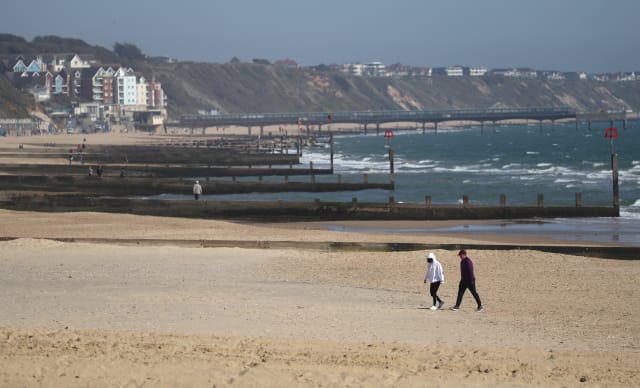 Young people may not be taking social distancing measures seriously despite strict instructions to stay at home to curb the spread of coronavirus, a minister has warned.

The news comes as people were spotted sunbathing on Saturday on the warmest weekend of the last six months – which is the second the UK has spent in lockdown due to Covid-19.

Speaking at the daily Downing Street press conference, Cabinet secretary Michael Gove said there is “evidence to suggest” compliance varies across different demographics of the population.

He explained: “There has been evidence that for some young people, there has been a lower level of compliance.

“That is why it is important that we reach them appropriately – it may be that some of the messages and some of the channels we have used have not reached some segments of the population.

Images posted on Twitter showed crowds of people in London Fields and Battersea Park in the capital, with some seen sunbathing and others on hire bikes.

In the North East, surfers were pictured on the beach at Tynemouth.

Mr Gove urged people to consider the current pressure on the NHS, and to ask themselves: “How am I helping in this shared national effort?”

He added: “I know that lockdown is challenging, I know it’s very difficult, particularly for families with children.

“But people must at every stage respect these guidelines because that is the only way of making sure we restrict the spread of the disease.”

Pleas to adhere to the lockdown are being transmitted nationwide, and Bournemouth pier has been adorned with the message “Stay home” – with just a few people seen making their way along the mostly deserted sands on Saturday.

There were similarly sparse scenes in Canon Hill Park in Birmingham, where a few people were pictured out running.

Earlier on Saturday, second homeowners were told to keep away from their holiday properties as police forces warned they would issue fines to anyone making non-essential journeys this weekend.

Gloucestershire Police said officers will be stopping people who look like they may be heading away for a few days.

The force said: “There has been particular concern among some communities that people who own second homes in the area will be visiting over the Easter holiday,” and they may put extra pressure on the local NHS.

Authorities in Wales have closed beach-side car parks to deter people from “using the weather to treat what is a national crisis like a national holiday”.

Mark Thomas, cabinet member for highways and infrastructure at Swansea Council, said: “We absolutely cannot afford a repeat of the behaviour witnessed on previous occasions.”

Dorset Council has taken the same approach, and the council has closed seafront parking bays and stopped the RNLI patrol in an attempt to prevent people from gathering at the seaside.

He predicted some parts of the UK “could be seeing 20-21C”, which would be “the first time we’ve reached over 20 since October 1 last year”.