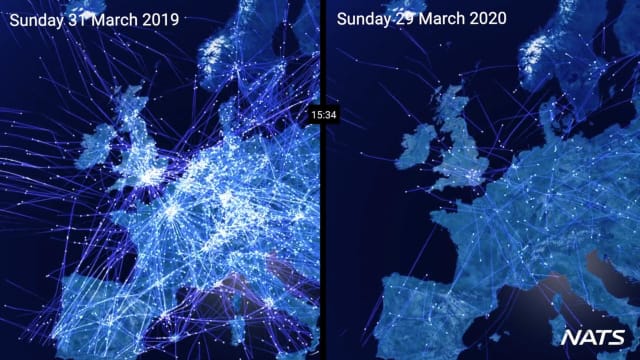 Air traffic in the UK is down by almost 90% compared with this time last year, the National Air Traffic Service (Nats) has revealed, as the coronavirus pandemic continues.

Only 832 flights were handled in UK airspace on Thursday 2 April, compared to 7,240, which were handled on the equivalent flying day last year – a decrease of 89%.

“Traffic has consistently been down by 89% since Tuesday,” a spokesperson for Nats said.

Nats said it would upload weekly data visualisations to Twitter to show the continuing impact of coronavirus on UK air traffic.

UK airports have responded to the collapse in flight numbers by significantly scaling down their operations.

London Gatwick closed one of its two terminals and introduced limited runway hours for scheduled flights on Wednesday.

London City Airport is now closed to commercial and private flights while Southend Airport is only open three days per week.

Multiple airlines have been hit financially by the crisis including British Airways, which has been forced to make cuts affecting up to 28,000 workers.

On Monday, easyJet announced it has grounded its entire fleet of 344 aircraft, saying the move “removes significant cost”.

Irish airline Ryanair said it expects to carry “minimal if any” traffic this April and May, that the number of passengers it carried in March was 48% lower than the same month last year.

It is currently flying less than 20 daily flights, compared to its usual 2,500.

The International Air Transport Association has estimated that the UK could see 113.5 million fewer passengers travelling through its airports in 2020, a drop of more than a third compared with 2019.

Thousands of extra food bank parcels given out during pandemic