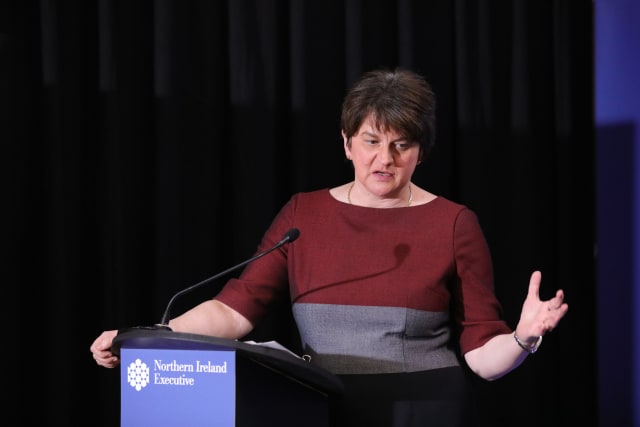 Vital public health messages about coronavirus must not be drowned out by political noise at Stormont, the First Minister has warned.

Arlene Foster moved to downplay suggestions of fracturing relations within the powersharing executive, stressing that ministers from all parties were united in a common purpose.

That was the latest in a series of episodes where ministers from different parties have appeared at odds on key aspects of the executive’s strategy in dealing with the outbreak.

At the Stormont leaders’ daily Covid-19 press briefing in Parliament Buildings in Belfast, Mrs O’Neill also attempted to emphasise that ministers were working together in the fight against the virus.

She said an executive meeting earlier on Friday afternoon had been very “constructive”.

Mrs Foster said the region’s politicians were being tested in a way that had not been experienced in generations.

She said ministers wold not always agree but said she did not doubt the sincerity of any of them in their desire to save lives.

“The pandemic is bigger than all of us, it’s bigger than any national identity or political philosophy and it is a challenge to every single human being,” she said.

“Whilst the weeks ahead will be difficult and extremely painful, we have to say for families in Northern Ireland, we have to together get through this.”

She added: “Whilst it may be tempting for some people to concentrate on apparent inconsistencies of approach between jurisdictions or indeed executive ministers, we need to focus on the things that really matter and we need to focus on getting our hospitals tooled up for the very difficult days ahead, of ensuring our nurses, doctors or indeed other key workers have the kit they need.

“And as we head into another weekend it’s essential that public health information on how social distancing can save lives is not drowned out.”

Mrs Foster said she hoped all ministers were working on “common ground”.

“We are looking towards unity of purpose and that unity of purpose is to get messages out around public health, to make sure that people take the actions that they personally can take, so that we flatten the peak,” she said

“The first surge is coming between April 6th and the 20th of April our modelling tells us. So it’s very important that regardless of all of the other bits of noise that there is about at this present moment in time that we recognise the public health messages about keeping yourself safe, keeping your family safe.”

She added: “So be under no illusion and let me say again, we are very much united in that unity of purpose in saving lives.”

Mrs O’Neill said politics was not a factor in any of the issues that had emerged within the administration.

“Make no mistake about it that we have the battle of our lifetimes on our hands,” she said.

“I am doing everything in my power, and we are, to make sure that we win that fight, to make sure we come out the other side of this as best as we can.

“This isn’t about politics, this is about doing right by our people, we’re looking into the peak of the first wave of this pandemic over the course of the next number of days and everything we do has to be, and is always about, saving lives, everything comes back to that.

“The Executive’s priority is to save lives.”

Mr Swann, who also attended the briefing, said he had no time to dwell on Mrs O’Neill’s criticism.

“As Health Minister in Northern Ireland I cannot afford to be distracted, and I won’t be distracted,” said the Ulster Unionist minister.

“Because we’ve done a lot of good work in a very, very short space of time – so we’ll keep doing what we’re doing.”