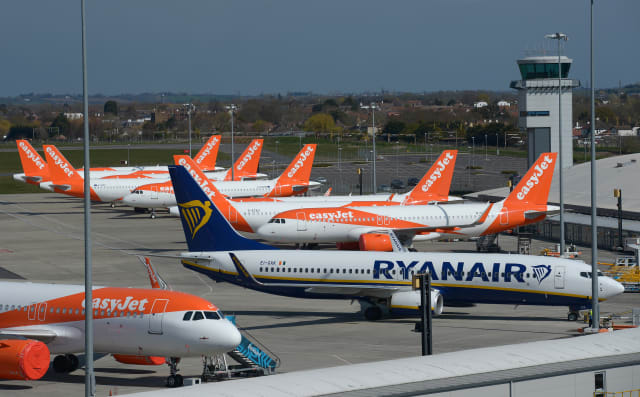 Ryanair expects to carry “minimal if any” traffic this April and May as the coronavirus pandemic forces its fleet to stay largely grounded.

Both depressed demand and government restrictions have forced Ryanair to stop flying, slashing the number of passengers it carries.

The company said that the number of passengers it carried in March was 48% lower than the same month last year.

It is currently flying less than 20 daily flights, compared to its usual 2,500.

It operated 33,000 scheduled flights in March, carrying 5.7 million passengers, though 64,000 flights had been budgeted.

The budget carrier revealed it would not be able to give guidance for the next financial year and warned that its profit was likely to be in the lower end of guidance for the 12 months that just ended.

It expects pre-exceptional profit after tax will fall between 950 million and one billion euros (£830 million to £875 million) in the 2020 financial year, which ran until March 31.

“This is due to the response of EU governments to the spread of the Covid-19 virus, which have since mid-March included widespread flight bans and travel restrictions which have closed Europe’s skies to all but a tiny number of rescue and medical flights,” the company told shareholders on Friday.

In the last 12 months, about 149 million passengers took a Ryanair flight, a 4% rise on the year before, even though the company was on track to carry 154 million as late as the beginning of March. This was before the worst of the pandemic hit Europe.

The airline said: “Due to widespread EU government flight bans and restrictions, Ryanair expects to carry minimal if any traffic during the months of April and May.

“Ryanair Group Airlines continue to work with EU governments to maintain minimum flight links for emergency reasons and to operate rescue and medical flights when requested to do so.”