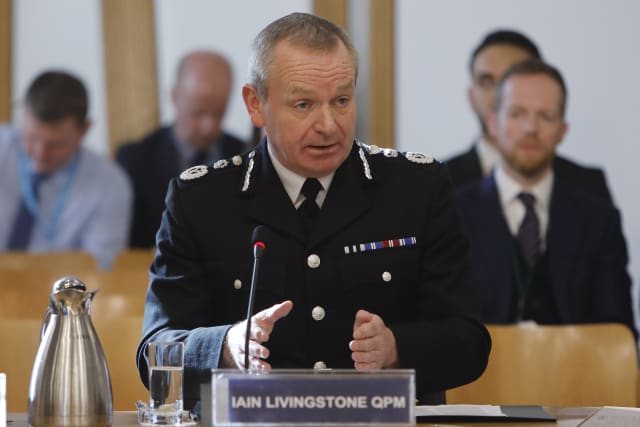 Police have issued more than 140 fixed-penalty notices to people flouting coronavirus lockdown rules in Scotland in the week since new powers came into force.

It is now a criminal offence to flout the public health guidance on social distancing to prevent Covid-19.

Police Scotland Chief Constable Iain Livingstone said the “overwhelming majority” of people in Scotland have been doing the right thing and following the rules.

But he warned police officers will not hesitate to take action against those who refuse to comply.

He told BBC Good Morning Scotland on Friday: “We’ve had to use the powers very infrequently. The level of co-operation and support from the public in terms of social distancing has been vast, overwhelming, everyone is stepping up and doing their duty.

“I said at the outset that we would use these powers only as a last resort and our approach would be to engage with people, to encourage people to comply with the social distancing guidelines, but where people refuse, where there’s absolute refusal to do the right thing by their fellow citizens, we will take action.

“We’ve issued more than 140 fixed-penalties right across the whole of Scotland in the first week, which is very low numbers in terms of enforcement, but I do think it’s important to know that when people refuse to co-operate, when people refuse to do the right thing, then police will take action.”

He said most of the fixed penalties had been issued to people in groups such as a gathering at a house party.

Meanwhile, Mr Livingstone said he is keeping a close eye on sickness levels within the force but at the moment it is able to meet requirements.

He said he is keeping an open mind about keeping numbers up and has been discussing various options with the special constabulary and with the retired police officers association.

He said: “At this stage I have not needed to mobilise such additional support but we will have to see how the future goes.”

Mr Livingstone urged people to continue to follow the guidelines to try and slow the spread of the virus.

He said: “My expectation is that the level of support, co-operation we’ve seen from the people of Scotland will continue.