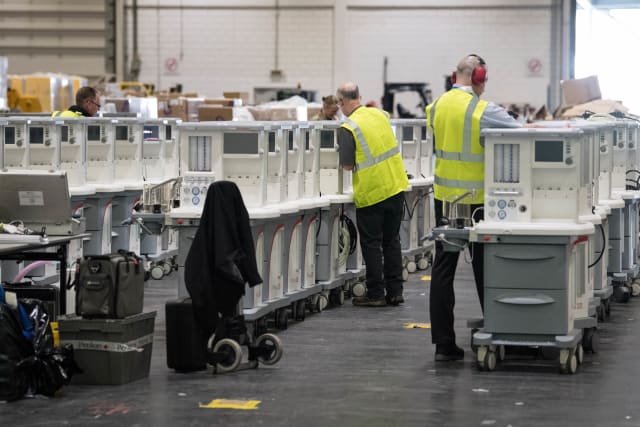 Health Secretary Matt Hancock has said the NHS is expecting to take delivery of 560 new ventilators amid the Covid-19 outbreak.

Earlier this week, the Government announced that 30 new ventilators would be supplied to hospitals next week, although it is thought the NHS needs at least 30,000 devices to cope with peak demand.

Downing Street had also called for UK manufacturers and suppliers to help boosts stocks, with firms including Dyson, Rolls-Royce and Mercedes Formula One team now involved in the efforts to produce more.

The devices take over a patient’s breathing function while they are sedated, pushing air into the lungs and giving time to fight the infection and recover.

Speaking to BBC Radio’s 4’s Today programme about Covid-19 testing and ventilator supply on Friday, Mr Hancock said: “I constantly look to see what more we can do from now on in.

“What are the extra things we can do.

He added the 30 new ventilators announced earlier this week had been a “first day” total.

Mr Hancock said: “There’s 560 already been done and that will ramp up as well.

“So, people will throw their rocks and make their criticisms but I think what we are trying to do in leading the nation through this is, at every single moment, work out what is the best we can do.

“If people come forward with new ideas we haven’t thought of, great, we will take them on.”

On Thursday, a leading group of manufacturers, The Ventilator Challenge UK consortium, announced it was targeting production of 1,500 ventilators a week by May.

Several other existing manufacturers are also scaling up their own production of ventilators to meet the demand.