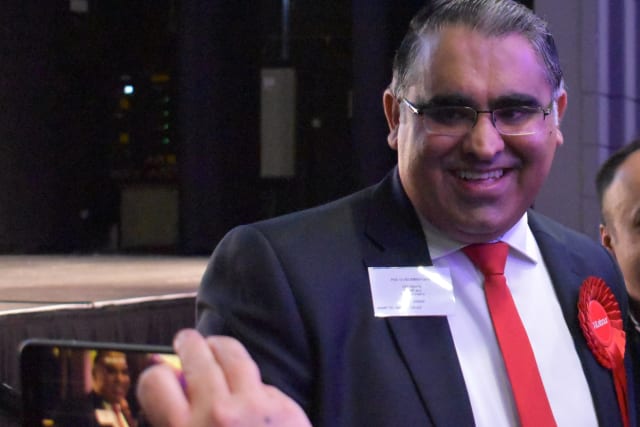 A Labour MP who went to a funeral as an “observer” has been spoken to by police about a suspected breach of the coronavirus lockdown.

Birmingham Hall Green MP Tahir Ali, who reportedly attended two funerals on Wednesday, was said to have undermined the work of the police by his area’s crime commissioner.

Mr Ali has issued an unreserved apology for confusion caused by his attendance at a funeral at Sutton New Hall Cemetery, amid community calls for limits on numbers attending to be raised.

Police were called to the site after up to 100 people were reported to have attended, although only 15 mourners were there when police arrived.

In a series of tweets, West Midlands Police said: “Following recent media coverage of a large gathering of mourners at a funeral in Birmingham earlier this week, we can confirm that we have spoken to Tahir Ali MP about a suspected breach of #coronavirus restrictions.

“We warned Mr Ali about his behaviour and reminded him of the clear need for everyone to follow the rules surrounding social distancing and the guidelines that have been issued around funerals.

“New restrictions have been placed on the numbers of mourners that can attend funerals in order to help stop the spread of #COVIDー19. We would urge people to check their local authority websites for guidance. It is vital people follow these rules.”

Police said that when they arrived at the council-run cemetery, officers “found approximately 15 people socially distanced into family groups, therefore no action was taken”.

The West Midlands’ police and crime commissioner David Jamieson said on Friday that Mr Ali had been irresponsible and was not setting a proper example to his constituents.

In a statement responding to Mr Jamieson’s comments, Mr Ali said: “I apologise unreservedly for the confusion caused by my presence as an observer at a funeral in Sutton Coldfield on Wednesday.

“I will not be attending any other similar gatherings.

“I wholeheartedly support the Government’s measures on social distancing to prevent the spread of coronavirus and urge everyone to follow them, in all our interests.

“I want to pay particular tribute to the outstanding work being done by our police, NHS and other statutory bodies in these most challenging of circumstances.

“It is clear that the message is not getting through and that a unified approach is needed by local authorities in the West Midlands and across the UK, with explicit guidance on funeral attendance, to avoid a repeat of Wednesday’s scenes.”

The MP added that he wanted to play his part in establishing a set of clear rules that allow a safe number of mourners, while doing everything necessary to protect the NHS and save lives.

In his statement, Mr Jamieson said: “Tahir has been totally irresponsible and is letting his constituents down.

“Mr Ali is not serving his constituents by endangering their lives.

“Those in positions of civic leadership should be setting an example to all of the public. I would urge him to stop his intended funeral attendance in other boroughs too.”

Birmingham City Council’s cabinet member for homes and neighbourhoods, Sharon Thompson, said: “For anyone who suffers a bereavement, it is a difficult and painful time.

“However, in these circumstances, measures have been put in place for one reason and that is to keep people safe.

“What we saw earlier this week with large numbers of mourners turning up at a cemetery simply cannot continue to happen. Not only does it place funeral staff in an extremely difficult position, but it puts lives at risk.”

The council said social distancing was the most important consideration in deciding how many mourners could attend a funeral in the city.

Ms Thompson said: “While we very much wish circumstances were different, we are looking to act as responsibly as we can and to keep our citizens safe.”