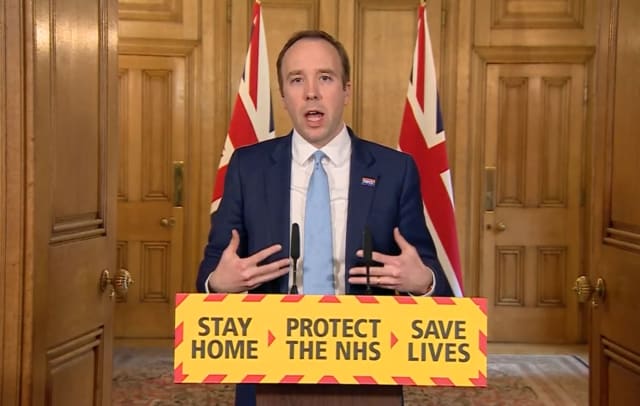 The Health Secretary has described having coronavirus as a “pretty unpleasant experience”, as cases of Covid-19 topped one million worldwide.

Matt Hancock said he has now fully recovered from the “nasty” illness, which saw him suffer sleepless nights and an “incredibly” sore throat.

He said Prime Minister Boris Johnson, who has “been working throughout” after he also tested positive for the virus, is a “bit under the weather” but is also “up and about and on the Zoom conference calls a huge amount, and on the phone”.

Of his own symptoms, Mr Hancock said: “It was a pretty unpleasant experience, I went downhill on Thursday last week and for a couple of nights it was very hard to sleep, incredibly painful throat, it was like having glass in my throat.”

He said he had also suffered a “bit of a cough” and lost half a stone in weight.

It comes as the John Hopkins University in the US, which is tracking the global picture, said Covid-19 cases have now passed one million across the world.

Meanwhile, two siblings of Ismail Mohamed Abdulwahab, the 13-year-old who died after testing positive for coronavirus, have also developed symptoms, according to a family friend who launched an online appeal.

The development means Ismail’s mother and six siblings are forced to self-isolate and cannot attend his funeral in Brixton on Friday, Mark Stephenson said.

Elsewhere, the NHS Nightingale Hospital at the ExCel centre in east London is due to open, while two other temporary hospitals have also been announced for Bristol and Harrogate.

Speaking on BBC Radio 4’s Today programme, Mr Hancock said it is unclear whether he is now immune to Covid-19.

“I took advice on that and the advice is it’s highly likely that I am now immune, or have a very high level of immunity,” he said.

“We have a stream of work under way… on immunity, with, potentially, having immunity certificates, so that if people have been through it, and when the science is clear about the point at which they are then immune, that people can then start getting back to normal even more because they have been through it.

“One of the big challenges in this is to know how long immunity lasts for.”

Mr Hancock said the virus is expected to peak in the UK in the next few weeks, adding: “It’s very, very sensitive to how many people follow the social distancing guidelines.”

He said there are around 35,000 front-line NHS staff who are not currently in work due to coronavirus, but he added the testing figures for health staff “should” rise to thousands a day in the next few weeks.

On Thursday, the Cabinet minister pledged England would hit 100,000 tests per day by the end of the month following widespread criticism of the Government’s testing strategy.

Mr Hancock said the goal can include antigen tests, which tell people whether they currently have Covid-19, as well as antibody tests to see whether people have previously had the infection.

A version of the latter has yet to be approved for use in the UK but several are undergoing rigorous testing.

He said currently no antibody tests have been “pencilled in” as part of the 100,000 figure, but “if we do find one that works, obviously that will be great”.

Mr Hancock said it is “frustrating” the first antibody tests to undergo testing have not worked, but more are coming, with many produced in China and some domestically.

He stressed “money is no object” in the UK’s coronavirus fight, adding work is ongoing to harness expertise in pharmaceutical firms that are not traditional testing companies.

“Money is no object here, what matters is getting the country out of this situation as quickly as possible,” he said, insisting testing is an important tool when looking to ease the lockdown.

In New York, members of the public are being urged to wear face masks or face coverings if they go outside after the World Health Organisation (WHO) said it would look again at whether they are effective.

However, US officials stressed this should not lead to complacency as people can still contract the virus via their eyes, and there is a continued need to keep hands clean.

In the UK, two newly-planned temporary hospital sites have been agreed at the University of the West of England and the Harrogate Convention Centre.

More than 6,000 additional beds are also being created by field hospitals erected in leisure centres and stadiums across Wales.

And construction of a temporary hospital called the NHS Louisa Jordan is under way in Glasgow.

Latest data shows 2,921 people were confirmed to have died in hospital after testing positive for coronavirus in the UK as of 5pm on Wednesday.