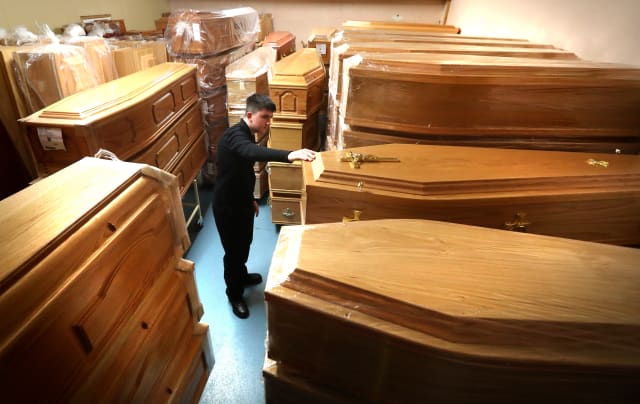 The boss of funeral provider Dignity has stepped down and branches may have to be closed, even as the country prepares for potentially tens of thousands of excess deaths from coronavirus.

Mike McCollum agreed with the board on Friday that it would be an “appropriate time for him to hand over as chief executive officer as the business approaches a strategic crossroads”, the business told investors.

Chairman Clive Whiley will become executive chairman until a permanent replacement for Mr McCollum can be found.

He said: “I would like to thank Mike for his extensive efforts over many years, in particular in leading the group as chief executive officer for the last 11.

“He has been a notable force throughout a period of significant growth, across all divisions.”

Dignity said that mourners might be prevented from holding church services, as social distancing continues to be government policy.

It could also lead many to choose more stripped-down funerals, eating into Dignity’s income per funeral and cremation, the business said.

It has withdrawn its limousines from use.

Most privately-owned crematoria are letting up to 10 mourners in, but some local authority sites are not allowing anyone attend.

Dignity said it would not speculate on how many deaths could be caused by coronavirus. Stephen Powis, the medical director of NHS England, has said that keeping deaths below 20,000 would show that the Government has done well.

Dignity said that a higher death toll could lead to lower numbers in 2021 and 2022.

“The group’s trading performance in 2020 was until last week broadly in line with its expectations. However, following the more stringent measures introduced by the Government, the current environment and the speed in which it is changing, the group is not providing guidance on 2020 and beyond,” Dignity said.

“The group continues to monitor the situation carefully and will provide a further trading update in due course.”

Mr McCollum added: “Whilst we are indeed operating in extraordinary circumstances, the acceleration of the root and branch strategic review of the business initiated upon my appointment, which is due to be completed in June 2020, was designed to strategically position the business for all eventualities.”