Dancing in the street has boosted community spirit, neighbours say 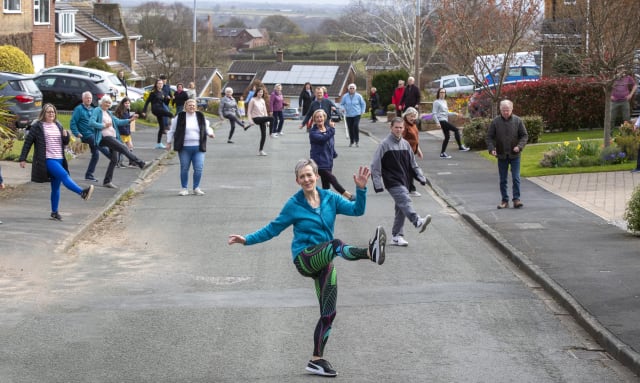 At 11am every day, neighbours on Springbourne in Frodsham leave their homes and join their neighbours, at a safe distance, for a dance.

The idea was started by exercise teacher Janet Woodcock, who had put notes through her neighbours’ doors to ask if they needed help during the coronavirus lockdown.

She said: “It’s given us fun, enjoyment, something really positive to think about and, perhaps more importantly, we are getting to know one another, in many cases for the first time.

“There’s this connection going on and we’re hoping that will carry on long after all of this.”

Among those joining in is 80-year-old Anne Daniels, who called for Ms Woodcock to be made a dame for her efforts.

She said: “She is absolutely superb, I really do think she is.

Since a video of the dancing was shared on Twitter, the street’s daily routine has become an internet hit.

Ms Woodcock said: “It was totally, totally unexpected and really bonkers actually for what it is, just a few people coming out in the street dancing about, being daft, and suddenly everybody’s grabbed it and is just enjoying it, which is great because it’s making everybody smile now.”

She said she hopes the community spirit will remain even after the lockdown is over and there were already plans for a street party.

“We weren’t a close-knit street at all and that’s what’s really nice, that we have come together and found something to smile about in this situation,” she said.

“I think we will be much, much stronger for it.”