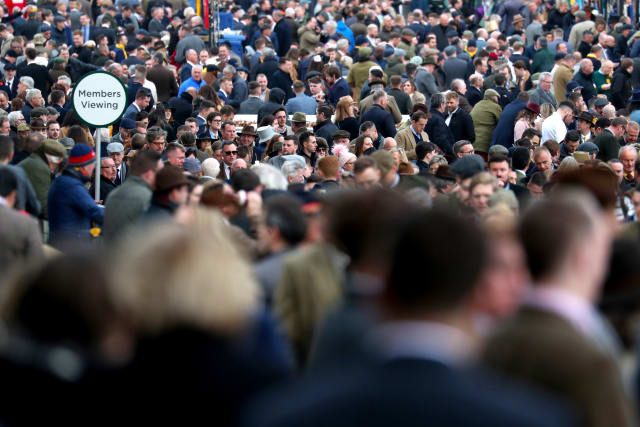 The organisers of Cheltenham Festival have defended their decision to go ahead last month after fears were raised the mass gathering helped spread coronavirus more widely around the country.

The four-day event saw more than 250,000 racegoers attend, despite the pandemic seeing the cancellation of other large sporting events in the days after.

A number of people reported on social media that they attended the festival, only to go on and develop symptoms of Covid-19.

However, festival organisers defended the decision to go ahead and said it complied with the government guidance at the time.

At the time of the festival, which ran from March 10 to March 13, the Government had not put any social distancing measures in place.

The day before the festival started, the Department of Culture, Media and Sport said there was “no rationale” to postponing events.

However, by that point, six people in the UK had died of the virus, while 373 had tested positive.

The following Monday the Prime Minister urged all people in the UK to avoid pubs, clubs and theatres and stop all non-essential travel and work from home.

On March 13, the Football Association, Premier League, EFL and Barclays FA Women’s Super League and FA Women’s Championship collectively agree to postpone the professional game in England until April 3 at the earliest, while Formula 1 suspended the start of the season.

A spokesperson for Cheltenham Racecourse said: “The Festival concluded three weeks ago and went ahead under the Government’s ongoing guidance throughout, like other popular sports events at Twickenham, Murrayfield, 10 Premier League matches and the Uefa Champions League at Anfield that same week.

“We promoted the latest public health advice and introduced a range of additional hygiene measures at the event, including hundreds of hand sanitiser dispensers and extra washbasins.”

Reflecting on the festival in the days after it drew to a close, Cheltenham chief Ian Renton admitted his relief, and said the event had been “interesting”.

He said at the time: “I’m relieved as it has been an interesting week with everything going on around the racing, but it is fantastic the day’s racing we have had today – to see probably one of the best Magners Gold Cups I can recall.”