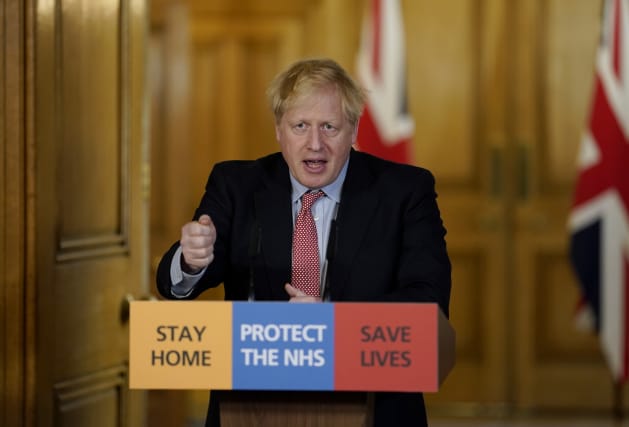 Boris Johnson has said he is “feeling better” after suffering from coronavirus but will remain in self-isolation until his temperature drops.

In a video on social media, the Prime Minister urged the public to stick with social distancing and not be tempted to “hang out” in the warmer weather predicted for this weekend.

“In my own case, although I’m feeling better and I’ve done my seven days of isolation, alas I still have one of the symptoms, a minor symptom, I still still have a temperature,” he said.

“So, in accordance with government advice I must continue my self-isolation until that symptom itself goes.”

Mr Johnson said people must not be tempted to break social distancing rules as the weather warms up even if they were going “a bit stir crazy”.

He said: “I reckon a lot of people will be starting to think that this is all going on for quite a long time and would rather be getting out there, particularly if you’ve got kids in the household, everybody may be getting a bit stir crazy, and there may be just a temptation to get out there, hang out and start to break the regulations.

“I just urge you not to do that. Please, please stick with the guidance now.”

The message comes as the first of the Government’s emergency field hospitals to treat coronavirus patients opened in east London’s ExCeL centre.

The temporary NHS Nightingale Hospital is able to take up to 4,000 patients and will be staffed by NHS medics with help from the military.

The Prince of Wales opened the hospital via video link, saying the new hospital “offers us an intensely practical message of hope for those who will need it most at this time of national suffering”.

Similar hospitals are being created across the UK, including in Cardiff, Glasgow, Manchester, Harrogate and Bristol.

Earlier, Health Secretary Matt Hancock described having coronavirus as a “pretty unpleasant experience” as he promised further action on testing.

He said he has now fully recovered from the “nasty” illness, which saw him suffer sleepless nights and an “incredibly” sore throat, as well as losing half a stone.

“It was a pretty unpleasant experience, I went downhill on Thursday last week and for a couple of nights it was very hard to sleep, incredibly painful throat, it was like having glass in my throat,” he said.

In Walsall, nurse Areema Nasreen, who was in intensive care on a ventilator after testing positive for the virus, has died.

The 36-year-old mother of three had been on a ventilator at Walsall Manor Hospital where she worked as a staff nurse on the acute medical unit.

Walsall Healthcare NHS Trust’s chief executive Richard Beeken said they had hoped to take Ms Nasreen off the ventilator as she had started to show signs of improvement but she then deteriorated.

Responding to the news, Mr Hancock told the PA news agency: “I pay tribute to the NHS staff who’ve died serving the NHS, serving the nation.”

In a statement, Mr Beeken said Ms Nasreen had died in the early hours of Friday morning.

“Any death is devastating but losing one of our own is beyond words,” he added, saying “Areema was extremely committed to her role as a staff nurse”.

Two siblings of Ismail Mohamed Abdulwahab, the 13-year-old who died after testing positive for coronavirus, have developed symptoms, according to a family friend.

The development means Ismail’s mother and six siblings are forced to self-isolate and were unable to attend his funeral in Brixton on Friday.

Speaking on BBC Radio 4’s Today programme earlier, Mr Hancock said it is unclear whether he is now immune to Covid-19.

“I took advice on that and the advice is it’s highly likely that I am now immune, or have a very high level of immunity,” he said.

He said there was a “stream of work under way” looking at immunity and the possibility of immunity certificates so those who have had Covid-19 can get back to normal.

Mr Hancock said the virus is expected to peak in the UK in the next few weeks, adding: “It’s very, very sensitive to how many people follow the social distancing guidelines.”

He said there are around 35,000 front-line NHS staff who are not currently in work due to coronavirus, but he added the testing figures for health staff “should” rise to thousands a day in the next few weeks.

On Thursday, the Cabinet minister pledged England would hit 100,000 tests per day by the end of the month following widespread criticism of the Government’s testing strategy.

The UK already has antigen tests, which tell people whether they currently have Covid-19, and work is ongoing to validate antibody tests to see whether people have previously had the infection.