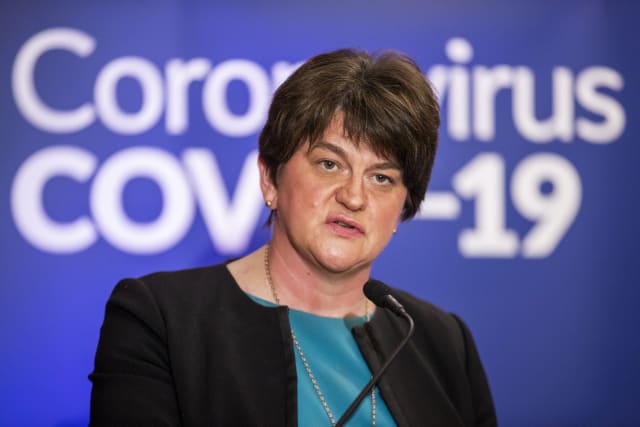 Ms Foster was speaking after deputy first minister Michelle O’Neill claimed on Thursday Mr Swann had been “too slow” to act on issues such as testing and personal protective equipment (PPE) for healthcare staff.

She told the BBC: “They (department of health) have been working very hard on a whole range of areas including workforce recruitment, they have put out an appeal for more people to come forward, they have brought forward specific Northern Ireland modelling so that we can have live data to make decisions on, which is critically important.

“We have a network of private care Covid centres, we have the reconfiguration of our hospital services, including the tower block at the City Hospital being made into a Nightingale hospital, and all the while dealing with the pressures around making sure that we have enough personal protective equipment for our frontline workers, and indeed having enough testing capacity as well.

“We have to support each other to make sure that we all work together because it’s the executive as a whole that has responsibility to deal with these matters.

“We have to collectively work together to make sure we put our best foot forward for all of the people of Northern Ireland.”

Asked if she had confidence in Mr Swann, Ms Foster responded: “I do, yes.”

Ms O’Neill stopped short of calling for Mr Swann to resign but criticised him for “slavishly following the Boris Johnson model”, claiming Northern Ireland has been left “not as prepared as we could be”.

A total of 36 people with Covid-19 have died in Northern Ireland, with 774 confirmed cases in the region.

The comments are the latest evidence of rifts in the coalition executive over the Covid-19 response.

Sinn Fein continues to express concern that the rate of testing in Northern Ireland – around 500 people a day, with a target of around 1,100 – is well short of what is required.

The republican party has also said more must be done to provide more PPE to workers.

Mr Swann had insisted both issues are key priorities for his department.

Ms Foster has denied the executive is “collapsing into disarray”.

“It’s not collapsing into disarray, it’s very important to recognise that we are coming forward as a five-party executive, I as the First Minister have a leadership role in that and I am trying to pull people together, and I speak to all of the ministers and pull us all together,” she said.

“I think it is recognised that we are living through abnormal times.

“When the executive was set up, and I think people need to reflect on this, but just at the beginning of this year, we knew that there would be challenges ahead, but none of us knew we were coming into the challenge that we are facing at this point in time, a challenge that we share with governments right across the world.”