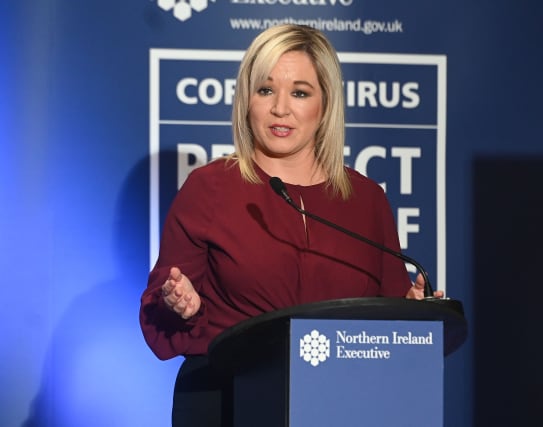 Northern Ireland’s deputy first minister has criticised the region’s health minister for his handling of the coronavirus emergency.

Michelle O’Neill said Robin Swann had been “too slow” to act on issues such as testing and personal protective equipment (PPE) for healthcare staff.

The Sinn Fein vice president accused the Ulster Unionist minister and his Department of Health officials of “slavishly following the Boris Johnson model”.

UUP leader Steve Aiken responded to the criticism, accusing Ms O’Neill of trying to exploit the crisis for political gain.

The deputy first minister stopped short of calling for Mr Swann’s resignation and insisted she was committed to working with him going forward.

“Slavishly following the Boris Johnson model, which has been too slow to act, means we are not as prepared as we could be,” she told BBC NI’s The View.

Mrs O’Neill added: “I have made these arguments privately and I feel it’s my moral duty, given the severity of the situation we are dealing with, that I have to say those things when I think they are not right.

Asked if she retained confidence in Mr Swann, she added: “I will continue to work with Robin, I think he has been too slow to act but I think we have to work our way through what is going to be even more difficult days in the time ahead and this is not a time to be calling for anybody’s head or any of those things.”

A total of 36 people with Covid-19 have died in Northern Ireland with 774 confirmed cases in the region.

The comments are the latest evidence of rifts in the coalition executive over the Covid-19 response.

Sinn Fein continues to express concern that the rate of testing in Northern Ireland – around 500 people a day, with a target of around 1,100 – is well short of what is required.

The republican party has also said more must be done to provide more PPE to workers.

Mr Swann had insisted both issues are key priorities for his department.

Ms O’Neill said her stance on testing chimed with World Health Organisation (WHO) advice and best practice in other countries.

“Boris Johnson has now just recently in last 24 hours realised that his policy has been flawed and he’s now moving towards more testing,” she said.

Ms O’Neill added: “It’s not easy to call things out whenever you think something is wrong but this is far too serious, this is not about party politics, this is about what is the best advice – the World Health Organisation have very clearly said ‘test, test test’.

“This is about trying to save as many lives as we possibly can.”

Ms O’Neill insisted the executive was “working together” to address the issues and said progress had been made.

“We have seen significant improvement and we are going in the right direction and I will continue to work with all the other ministers to do everything we can to get ourselves through this,” she said.

Mr Aiken said the deputy first minister’s comments were “regrettable but not unexpected”.

“Northern Ireland is in the midst of a health crisis the like of which has not been seen in over a century,” he said.

“There is a need for the Northern Ireland Executive to be joining together, united in defeating the virus. The Health Minister Robin Swann and the staff in our health service have been responding magnificently to the unprecedented challenge.

“It is regrettable but not unexpected that the deputy first minister and Sinn Fein continue to seek to gain political advantage rather than joining together with the rest of the executive’s political parties to do what is best for us all.

“It is well beyond time that Sinn Fein got the message and started working co-operatively for us all.”