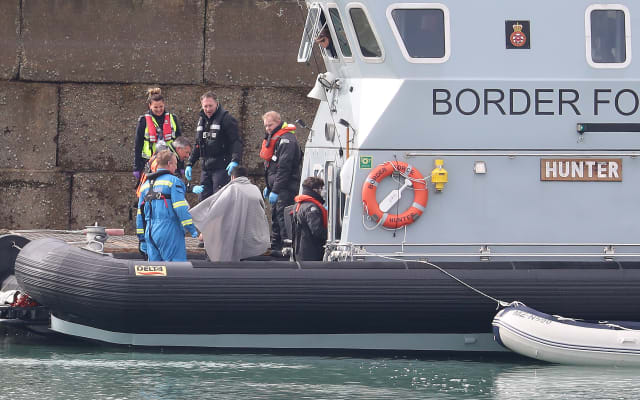 More migrants have been brought ashore in Dover amid fears the coronavirus pandemic has reached refugee camps in northern France.

Suspected migrants in hats and blankets were seen at the Kent port after being met by Border Force officials.

Sea conditions in the English Channel – the busiest shipping lane in the world – were slight with only a gentle breeze on Thursday morning.

It is not yet clear how many boats were intercepted in the Channel on Thursday, but Border Force cutters were active in the Dover straits from the early hours.

Pictures taken at the Port of Dover show a handful of suspected migrants being processed by Border Force staff, many of whom were apparently not wearing any personal protective equipment (PPE).

The latest activity follows a surge of crossing attempts on March 25, when 169 people were rescued trying to make the treacherous journey.

Following that incident, the Home Office denied the Covid-19 pandemic is affecting its ability to respond to migrant crossings and insisted it still has the resources it needs.

On Wednesday night, Care4Calais charity founder Clare Moseley said the organisation had learned at least one case of Covid-19 has been found in a camp near Dunkirk.

Speaking to the PA news agency, she said she is “very scared” about the implications of the virus spreading to the migrant camps, where access to soap and food is limited.

She called on French authorities to act, saying: “They have to do something now. They have to get them the ability to isolate and separate up because everybody in the camps is going to have it.

“It’s literally a humanitarian disaster. Something has to be done now.”