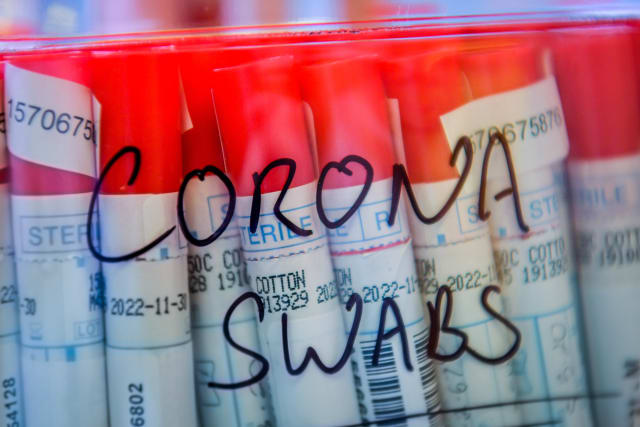 Questions are being asked about the involvement of health officials in England over the collapsed deal to supply Covid-19 testing equipment to the NHS in Wales.

The row over testing has intensified since it emerged at the weekend that the deal with Roche had collapsed.

The Swiss pharmaceutical giant has denied ever having a “contract or agreement directly with Wales” to supply tests.

The Welsh Government had planned from April 1 to be able to do 6,000 tests daily, instead of the current 1,100.

By April 7, this was to increase by a further 2,000 tests per day and by the end of April there would have been capacity for 9,000 a day.

In Wales 98 people have died after contracting coronavirus, while 1,837 have tested positive.

Stephen Crabb MP, chairman of the Welsh Affairs Committee, has written to Secretary of State for Wales Simon Hart asking questions about the deal between Roche and the Welsh Government.

He asked what understanding Mr Hart had of the deal the Welsh Government had in place, and if Roche had been in negotiations with Public Health England about providing tests in England.

Mr Crabb said: “The reported collapse of a deal for up to 5,000 additional daily tests in Wales comes at a moment of heightened public concern about the need for much greater Covid-19 testing.

“It raises important questions about the level of intergovernmental co-ordination and co-operation between Whitehall and Cardiff Bay in the procurement of tests and other essential equipment.

“The people of Wales need an urgent assurance that the UK and Welsh governments are working together effectively to ensure all corners of the UK are given their fair share of testing kits.”

First Minister Mark Drakeford told the Senedd on Wednesday that Roche should have “honoured” the agreement to provide 5,000 tests a day.

“We did have a deal, it was with Roche. We believe that it was a deal that ought to have been honoured,” Mr Drakeford said.

“We now have access to a supply of tests from a consortium of suppliers that will give us a considerable uplift in testing here in Wales.”

“It is in the public interest that the Welsh Government and Roche tell us what exactly happened to make the agreement fail,” he said.

“Testing in Wales using the Roche capabilities is due to begin next week.

“Public Health England has agreed with Public Health Wales that any additional testing requirements for Wales required in the meantime will be delivered by us.

“Public Health England did not intervene in any discussions between Roche and Wales.”

Roche Diagnostics said: “We maintain that Roche never had a contract or agreement directly with Wales to supply testing for Covid-19.

“Our absolute priority and focus at this time is to support the UK Government and NHS to scale up testing across the whole of the UK, including in Wales.

“As part of the centralised rollout of testing, we will continue to speak to colleagues at Public Health Wales to move this forward as quickly as possible.”