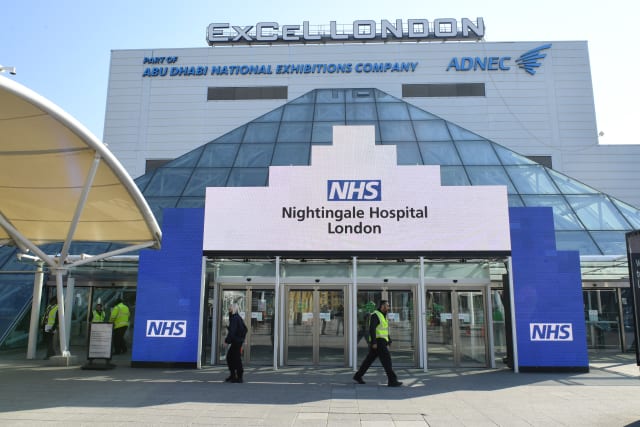 The first of the Government’s new Nightingale hospitals will open in London on Friday to continue the battle against coronavirus, hours after the Health Secretary pledged to dramatically boost testing figures.

The NHS Nightingale Hospital at the ExCel centre in east London is due to admit its first Covid-19 patients, while two other temporary hospitals have also been announced for Bristol and Harrogate.

Meanwhile, after several days of intense scrutiny over failures in testing, Health Secretary Matt Hancock has set a target of achieving 100,000 daily coronavirus tests in England by the end of April.

They will include antigen tests, which tell people whether they currently have Covid-19, as well as antibody tests to see whether people have previously had the infection.

Experts say testing is important to track the virus and give the UK hope of exiting the lockdown, with those who are confirmed to have already had the virus able to return to work.

Mr Hancock, who has recovered from Covid-19 and came out of self-isolation on Thursday, announced a new “five-pillar” strategy to increase the country’s testing capacity.

Elsewhere, NHS England said 1,500 extra beds for coronavirus patients will be available at two newly-planned hospital sites at the University of the West of England and the Harrogate Convention Centre.

The temporary hospital in Bristol will be able to look after up to 1,000 patients, while Harrogate can care for up to 500.

It comes as leaked documents revealed bosses at London’s new Nightingale Hospital are worried about the number of ambulances and trained crew needed to bring cases to the site.

Communication is also envisaged to be a problem due to the building’s poor acoustics and because all staff will be working in an unfamiliar setting.

Meanwhile, Mr Hancock said he had come out of isolation “redoubled in my determination to fight this virus with everything I’ve got.

“And we will strain every sinew to defeat it once and for all.

“And I will stop at nothing to make sure that frontline staff have the right equipment so that they are safe and can have the confidence they need to do their jobs.”

Mr Hancock said the UK lacked a large diagnostics industry so was having to build from a “lower base” than the likes of Germany, which is testing around 70,000 people per day.

Mr Hancock said a country-wide shortage of swabs had been “resolved” but that there remained a “global challenge” around sourcing the reagent chemicals needed for the tests.

He said NHS staff would be able to get tested for Covid-19 “absolutely before the end of the month”.

He added: “With 5,000 tested since (staff testing) started at the weekend we’ve clearly made significant progress.”

Mr Hancock said the Government was working with nine potential providers on a new antibody test – which many argue is the key to releasing the lockdown – but that this would only be rolled out when clinicians were confident it was a valid test.

He added: “No test is better than a bad test.”

Speaking on BBC’s Question Time, when asked by Yvette Cooper whether testing needs to go “way beyond” 100,000, he said: “We have a goal of 250,000 but I wanted to put a timeframe on it. I wanted to say to my team, to the team at PHE, who have been brilliant on this, to the NHS and the life sciences industry and all the companies involved, and charities and all the rest – this is the collective goal.”

The Health Secretary also announced in the daily press conference that more than £13 billion of historic NHS debt would be written off to place trusts in a “stronger position” to respond to the coronavirus crisis.

Figures showed that 5.7% of doctors were currently absent due to Covid-19, he added.

Earlier in the week, the Royal College of Physicians said around one in four were absent.

It comes as Downing Street said on Thursday that Boris Johnson was still showing coronavirus symptoms.

The Prime Minister’s seven days of self-isolation end on Friday but it is unclear whether he plans to leave the Downing Street flat where he has been staying.

Latest data shows 2,921 people were confirmed to have died in hospital after testing positive for coronavirus in the UK as of 5pm on Wednesday.

The youngest person who died without underlying health conditions was aged 25.

The total is up by 569 from 2,352 the day before and is the biggest day-on-day increase so far, just above the 563 reported the day before.