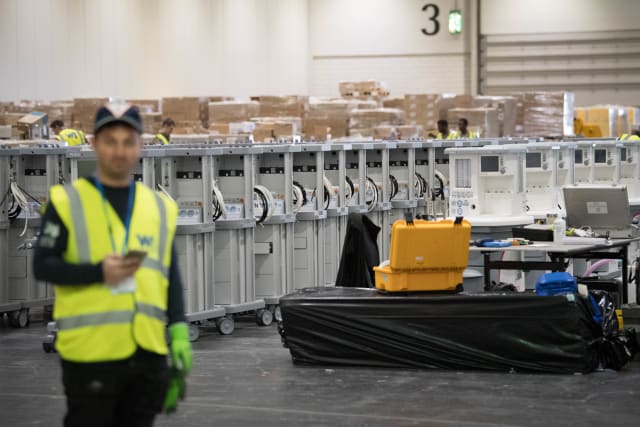 Health officials fear communications and lack of clinically trained staff will present some of the biggest challenges to a new 4,000-bed field hospital set to open on Friday.

Leaked documents revealed bosses at the new Nightingale Hospital, set up at the ExCel centre in east London, are worried about the number of ambulances and trained crew needed to bring cases to the site.

Communication is envisaged to be a problem due to the building’s poor acoustics and because all staff will be working in an unfamiliar setting in a team of people they have never met before.

The vast, open building is normally used as a venue for trade fairs and exhibitions.

The documents said “communications within the intensive care will require particular attention”, the HSJ reported.

The documents also warned that non-specialist nurses may be asked to perform “unfamiliar” tasks – such as dealing with complications arising from intubation – normally only done by intensive care nurses.

Health officials also plan for the site to receive lower-risk patients, with the most acute cases still being admitted to London’s hospitals.

The elderly and those with another life-threatening or life-limiting condition are not expected to be sent to the Nightingale.

But the documents also revealed that between 16% and 20% of those admitted are expected to die, the HSJ reported.

The draft clinical model said the aim of the facility was to reduce deaths, be part of the wider London critical care system, and to “provide hope” to the public.

The Nightingale, named after nursing pioneer Florence Nightingale, will need an army of up to 16,000 staff in clinical and ancillary roles to keep it running.

Set up by NHS contractors with the assistance of around 200 military personnel in a matter of weeks, the hospital is now preparing to receive its first wave of patients.

The location of the hospital was only announced to the public on March 24.

Hundreds of volunteers from the St John Ambulance charity with differing levels of clinical training have volunteered to help out at the facility, with around 100 expected to work every shift.

Grounded cabin crew from the UK’s biggest airlines have also been invited to volunteer at the Nightingale and similar planned facilities in Birmingham and Manchester.

Almost all flight staff have first aid training, including in CPR.

Their salaries will continue to be paid by the airlines.