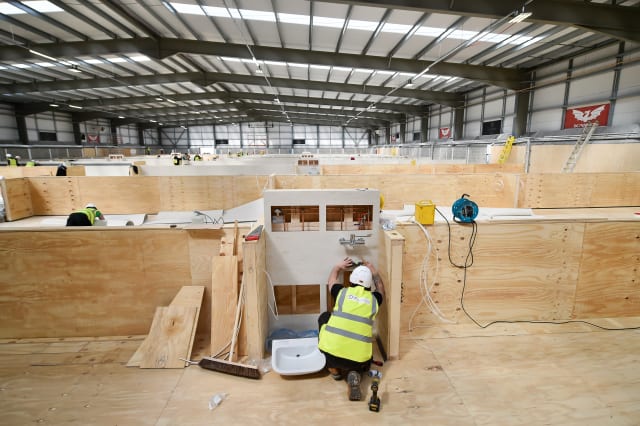 More than 6,000 additional beds will be created by field hospitals erected in leisure centres and stadiums across Wales.

Dr Andrew Goodall, the chief executive of NHS Wales, told a press conference in Cardiff that he expected “significant” pressure on the health system from coronavirus.

Two thousand beds will be available at the Principality Stadium in Cardiff, with more than 350 at the Parc y Scarlets in Llanelli and a similar number at Venue Cymru in Llandudno.

Public Health Wales announced on Thursday that another 19 people had died with coronavirus, bringing the total number of deaths to 117.

A further 284 new cases have tested positive for Covid-19, meaning there are now 2,121 confirmed cases in the nation, although the true number of cases is likely to be higher.

Dr Goodall said there were 573 patients confirmed as having the virus, and a further 399 suspected cases, in hospitals in Wales.

Speaking about the field hospital plans, he told the press conference: “We expect the pressure on our health care system to be significant.

“We’ve never taken such actions before and they are a necessary response to ensure that we care for our patients and for our communities.”

He described the situation as “extraordinary times” for the NHS and praised staff for their “fantastic” response.

“Clearly, these are exceptional, extraordinary circumstances that we’re going through and for all of us who work in the NHS context we will never have experienced this kind of environment,” Dr Goodall said.

Private hospitals in Wales have agreed to provide 152 additional beds, as well as facilities including operating theatres and diagnostic support.

Dr Goodall said he had written to all health boards on Thursday, telling them to “continue to prioritise cancer treatment”.

Cancer charities in Wales had previously raised concerns that hundreds of people could die due to delays in treatment and screening due to the focus on coronavirus.

Critical care capacity across Wales has been increased to 331 beds, with around 55% of these currently unoccupied.

The Welsh Government had planned for 5,000 coronavirus tests per day to be carried out from April 1 but the figure will only reach 1,100 by the end of this week following the collapse of a deal with a testing company.

Mark Drakeford, the first minister of Wales, named the company involved as Swiss pharmaceutical giant Roche during a virtual sitting of the Welsh Assembly on Wednesday.

But Roche denied ever having “contract or agreement directly with Wales” to supply tests.

Dr Goodall said 1,500 members of NHS staff had been tested across the nation to date but the numbers were increasing, with around 200 healthcare workers per day currently being tested.

Sickness and absence rates across the NHS in Wales are currently at 10% – double the normal level.

“Just yesterday we were close to 1,000 tests actually being processed and you will continue to see those numbers actually rising in Wales, but important to say that whatever opportunities we have, we continue to explore them to expand the testing,” Dr Goodall added.

Revisions to existing guidelines of personal protective equipment (PPE) are expected to be announced, he said.

Over the past few weeks, more than five million items of PPE have been distributed to the healthcare sector in Wales, including GP practices, pharmacies and to social care workers.

“There are also emergency hotlines in place should there be any concerns about local access at this time, and we’ll continue to work with health organisations and particularly with the social care sector in Wales,” Dr Goodall said.

Earlier, Mark Polin, chairman of Betsi Cadwaladr University Health Board, told BBC Radio Wales that PPE was the “number one concern” for staff.

And Helen Whyley, director of the Royal College of Nursing, wrote to the Health and Safety Executive (HSE) asking for it to intervene in the issue of PPE for frontline staff in Wales.