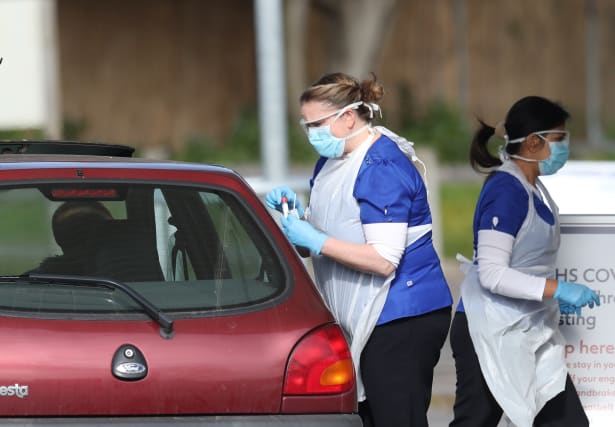 Health Secretary Matt Hancock has announced a “five pillar” plan to increase the number of coronavirus tests from 10,000 to 100,000 per day.

Laying out the strategy at a press briefing on Thursday, he said it would include working with universities and private businesses to establish new swab testing sites.

Plans are also in place for leading pharmaceutical firms to help create a British diagnostics industry “at scale” to help reach a target of 100,000 tests per day by the end of April.

Former health secretary Jeremy Hunt, who has previously been critical of the Government’s testing policy, welcomed the announcement, but said more antigen, rather than antibody, tests are needed.

The five-pillar plan aims to:

– Introduce antibody blood tests to determine whether people have had Covid-19, with results potentially ready within 20 minutes.

– Conduct surveillance testing to learn more about the spread of the disease and rate of infection.

Mr Hancock said the Government is working in partnership with universities and companies including Amazon and Boots to build a network of new testing sites “from scratch” across the country.

He said the service has already been launched and is “ramping up rapidly”, with the number of tests due to significantly increase from this weekend.

New blood tests designed to tell if people have had the disease and are now immune will also be introduced, Mr Hancock said

“This could potentially be done at home with a finger prick and deliver results in as little as 20 minutes,” he said.

The Government is working with nine companies that have offered the tests and is “evaluating their effectiveness,” Mr Hancock said.

Meanwhile, surveillance testing will be used to determine what proportion of the population has the virus.

Mr Hancock said there is capacity for 3,500 of the “ultra high accuracy” antibody tests which will be used to ascertain the information.

“Robust population surveillance programmes are essential for understanding the rate of infection and how the virus is spreading across the country,” Mr Hancock said.

He said the results will inform the Government on the “big choices we have to make around social distancing and how we exit from this crisis”.

The final pillar of the plan will involve pharmaceutical giants such as AstraZeneca and GSK working with smaller British companies to build a diagnostics industry “at scale”.

“The new national effort for testing will ensure we will get tests for everyone that needs them,” Mr Hancock said.

In a Twitter post, Mr Hunt said: “No one can doubt the extent of the govt’s commitment to testing. You don’t promise 100k tests a day with a firm deadline unless you are deadly serious.”