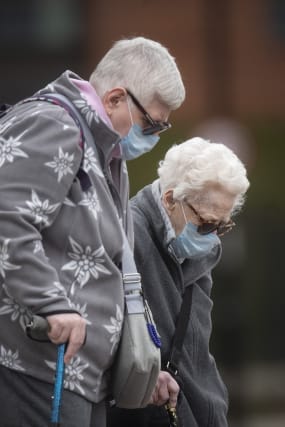 The outbreak of coronavirus has seen a surge in demand for surgical masks to cover the mouth and nose, and they are a common sight on UK streets.

But up until now, the World Health Organisation has said only those with Covid-19 symptoms and those caring for them need masks, but this guidance is set to be reviewed following new evidence.

A study from Hong Kong appears to show surgical masks can help protect the public from the spread of the virus, so is it time to stock up?

Here’s the guidance on masks as it stands.

-Who should wear a mask?

The WHO says that only those with symptoms of coronavirus such as a persistent dry cough, a fever or difficulty breathing need to wear a mask.

Masks worn by sick people protect others from the infection by the droplets that come out when they cough or sneeze.

People caring for them should also cover up whenever they are in the same room as the patient to prevent the spread of the virus.

It says surgical masks can only help when used with other preventative measures such as frequent hand washing.

-Why is the WHO’s guidance being reviewed?

A study from Hong Kong appears to indicate that the use of face masks can slow the rate of infection among the general population.

The data was shared confidentially with the WHO but is expected to be made public soon.

David Heymann, Professor of infectious disease epidemiology at the London School of Hygiene & Tropical Medicine, said on Thursday: “As always, when new evidence becomes available, WHO will be considering its face mask policies as a routine activity this week and next.

“Recommendations will be taken from many different advisory groups, including the external advisory group that I chair, and then WHO will decide if there is enough evidence to merit any changes in policy.”

He said the WHO’s decision would also have to factor in the availability of face masks globally.

– How often should a mask be replaced?

The WHO warns that masks can give a “false feeling of protection” and can even be a source of infection if used incorrectly.

Surgical masks should only be used once and should be disposed of in a closed bin as soon as they become damp.

Those using a mask should avoid touching it while wearing it and remove via the elastic straps that go over the ears and immediately wash their hands once it has been removed and disposed of.

But NHS staff say shortages of masks are causing huge problems within the service.

A nurse at a Bristol hospital said a lack of masks meant staff sometimes wearing the same one for the duration of their 12-hour shift.

The nurse told the PA news agency masks are usually worn for about 15 minutes at a time before being disposed of, adding: “If we pick up anything from a patient, we are potentially carrying it around in our masks all day.”

She described the masks as “a total placebo” adding, “we would be better off with nothing”.

– Are there enough masks?

Health officials have promised that more personal protective equipment (PPE) is on its way to the frontlines, but many health professionals said they had resorted to ordering their own supplies.

Social care charities have reported suppliers hiking prices on face masks by as much as 1,000% while tattooists, nail bars and vets are among businesses asked by local councils to help by donating masks and gloves.

Dr Jenny Harries, deputy chief medical officer for England, said on Tuesday the UK had “sufficient stocks” but the logistics of getting PPE to where it is most needed had been difficult.

Communities Secretary Robert Jenrick said there was a “military operation” ongoing to move stocks around the country, with national distribution companies drafted in to help.

Some Asian countries and a handful of European nations have already made face masks compulsory in public on the basis that many people infected with the virus show no symptoms.

In Europe, just Austria, Slovakia, the Czech Republic and Bosnia-Herzegovina have introduced these measures.

In the Philippines, residents now have to wear a mask in public, and the same is true in some of the worst-affected provinces in China.

Meanwhile, in Hong Kong, South Korea, Thailand and Taiwan the majority of citizens are sporting a mask anyway and it is also common to do so in these regions anyway because of air pollution.

Britain will not 'look away' from Hong Kong responsibilities, says Raab